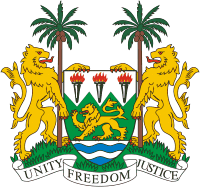 Samuel Tinga Khendekha Seisay (born ) is a an pro- and .

Born to a prominent political family, Seisay was educated at the prestigious . He began his career as a law enforcement officer after graduating from the Police Training School at Hastings. After several years with the Sierra Leonean police force, Seisay departed for Europe to continue his studies. A gifted student, Seisay was accepted at the in where he read engineering and took his bachelors degree. While he was a student, Seisay had a life changing meeting with in Stockholm which deepened his interest in nonviolent activism.

Seisay earned a masters degree in at . He is a PhD candidate at in .

In , Seisay founded the Sierra Leone Ex-Police Officers Association. He was elected as their representative to the Civilian Rule Committee, that was going to restore civilian rule in Sierra after the military government of . In , Juxon Smith's government was overthrown in the . Seisay was then appointed Deputy Commissioner of the Sierra Leonean Police Force by the ruling junta. Seisay proved to be most efficient in this post especially considering the difficult political climate and skillfully helped manage the transition.

Seisay was initially tapped to serve as Sierra Leone's to but was instead appointed to the . He was stationed in New York where he served for six years.

Under his leadership, the Sierra Leone Consulate became financially self-sufficient. Seisay also served as Dean of the Consular Corps.

After Steven's declared a one-party state, Seisay's cousin staged an unsuccessful military coup. Bangura was executed for treason. Seisay became an opponent of the Stevens government. He left his post as Consul General and began to protest the decline of democracy in Sierra Leone.

Seisay then went into self-imposed political exile, from which he advocated . Among his allies were his older brother , Director of Prisons, and former Prime Minister until Margai's death in 1980. Seisay aided Sierra Leoneans who fled from persecution to get political asylum in the United States. In 1987, Seisay's political exile ended when became President of Sierra Leone.

Seisay became an executive in the private sector. Based in the , he continuing to work internationally and remained devoted to the cause of re-establishing democracy in Sierra Leone. In the early 's, he married a member of the Swedish and they raised their family in , New York.

He has lectured at several universities, including Dartmouth, and published a number of articles and op-eds most notably in and .