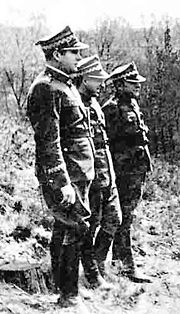 After the war he held a number of offices in the communist government of Poland, one of his first being that of mayor of Warsaw (18 September 1944 – March 1945), technically still while the war was in progress. Among other posts, he was a long-time member of the Sejm (parliament) and, between 1968 and 1970, the chairman of the Council of State (the de iure head of state in the People's Republic of Poland).

He was imprisoned during the purges in 49–53 and was only released from prison in 1956 to become Polish Minister of Defense, replacing the Soviet marshal Konstantin Rokossovsky.

This article incorporates information from the equivalent article on the Polish Wikipedia.