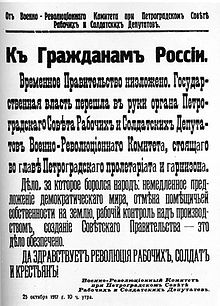 The Military Revolutionary Committee also known as the Milrevcom (Russian: Военно-революционный комитет, военревком, ВРК) was the name for military organs under the soviets during the period of the Russian Revolution and Russian Civil War. The most notable ones were those of the Petrograd Soviet, the Moscow Soviet, and at Stavka.

The Petrograd Military Revolutionary Committee was created on 16 October 1917.[1]

This is the same organisation translated as the Revolutionary Military Committee in Lenin's collected works.[citation needed]

Although it took its form and inspiration from the earlier Committee for Struggle Against the Counter-Revolution of the Kornilov Affair, the Military Revolutionary Committee itself was only formed during the last weeks, and indeed days, of the Provisional Government's existence. On 5 October 1917, General Polkovnikov, the commander of the Petrograd Military District, ordered the bulk of the capital's garrison units (those considered by the Provisional Government to be politically unreliable) to prepare for immediate transfer to the front. Given the inflamed political atmosphere this was, perhaps unsurprisingly, a fatal miscalculation on behalf of Alexander Kerensky and quickly sparked a "general mutiny" with most garrison units openly declaring loyalty to the Petrograd Soviet. It was in the city's soviet on 9 October that the crisis truly exploded and the body, by now with a Bolshevik majority, adopted a militant resolution authored by Leon Trotsky, that specifically called for the creation of a 'military revolutionary centre' to "facilitate the revolutionary defence of Petrograd... from the attacks being openly prepared by military and civil Kornilovites". [2] Over the following days the composition and structure of this new MRC was decided upon, albeit without reference to Trotsky's inflammatory provocation to the Provisional Government, and the body was ratified by the Soviet on 16 October. It began to gather in the Smolny on 18 October and its first official meeting was not held until 20 October. Its chair was the SR Pavel Lazimir.

The following days saw the escalation of the garrison crisis as unit after unit declared their willingness to obey the Petrograd Soviet, with only three of the eighteen garrison representatives expressing confidence in the Provisional Government.[3] Establishing its authority amongst the garrison was the immediate focus of the MRC; it began to dispatch its own commissars to the garrison formations and on 21 October a delegation, including Lazimir, formally asserted the committee's claim to prior command before General Polkovnikov. According to Czech historian Michael Reiman, this act can be considered the true beginning of the October Revolution - "Already on October 21 and 22 the Military Revolutionary Committee, in effect, took upon itself authority over the garrison. Its actions, from both a practical and a juridical standpoint, would be considered by any nation a clear case of mutiny and insurrection".[4] With the loyalty of the garrisons secure, the following days would see the MRC locked into a confrontation with the Kerensky regime and culminating in the pronouncement of 24 October:

Throughout the following events of the October Revolution the MRC would play the crucial role of coordinating the thousands of soldiers, sailors, and armed workers involved in seizing control of the city. It was on its authority that the Provisional Government was ultimately disbanded and power transferred to the Second All-Russian Congress of Soviets. A pamphlet titled "To the citizens of Russia" (facsimile shown opposite) was signed by the Revolutionary Military Committee of the Petrograd Soviet of Workers' and Soldiers Deputies and dated "10am, October 25, 1917". It reads:

In Lessons of October, Leon Trotsky, who was one of the leaders of the Russian October Revolution and considered second only to Lenin, argues that the Petrograd Soviet essentially entered a state of armed insurrection before October 25: "From the moment when we, as the Petrograd Soviet, invalidated Kerensky's order transferring two-thirds of the garrison to the front, we had actually entered a state of armed insurrection... the outcome of the insurrection of October 25 was at least three-quarters settled, if not more, the moment that we opposed the transfer of the Petrograd garrison; created the Military Revolutionary Committee (October 16)...".[7] Kerensky's order was issued not long after the Bolsheviks gained a majority in the Petrograd Soviet and Trotsky was elected Chairman (the latter took place on September 26, 1917 Old Style. The Soviet took the view that Kerensky was attempting to remove the revolutionary-leaning troops who were following the directions of the soviet, and replace them with ones who would not oppose his orders.

Milrevcom as the first proletarian government

On the second anniversary of the October Revolution, a friend of Trotsky, Adolf Ioffe, wrote an article on the Military Revolutionary Committee of the Petrograd Soviet for the Communist International titled “The First Proletarian Government.” [8] The MRC was created approximately two weeks before the Bolsheviks seized power in response to the decision of the Provisional Government under Kerensky to transfer military units that were suspected of being too strongly under the influence of Bolsheviks or other radical parties. [9]

A bureau composed of three Bolsheviks, Nikolai Podvoisky, Vladimir Antonov-Ovseenko, and A.D. Sadovsky, and two Left Socialist Revolutionaries, Pavel Lazimir and G.N. Sukhar’kov, headed the MRC. Lazimir, at age 18, was the Chairman at first, but during the subsequent insurrection, this role became Podvoisky’s, with his fellow Bolshevik Antonov-Ovseenko serving as Secretary. [11]

The MRC was made up of its headquarters and corps of commissars who reported directly to the headquarters. The commissars were mostly Bolsheviks who were formerly political prisoners of the Provisional Government. Between October 21- 24, 1917, they successfully deposed the standing commissars of the Central Executive Committee of the First Congress of Soviets, who were mostly Mensheviks and Socialist Revolutionaries, and thereby ensured that the military would be under their command. On October 24-25, 1917, the Bolsheviks, through the MRC, were able to assume power.

The headquarters of the MRC was located on the third floor of the Smolny Young Ladies’ College. Originally, it had seven departments: defense, supplies, communications, information bureau, workers’ militia, reporting section, and commandant’s office. On October 20, 1917, the department of revolutionary air services was added, and on October 24, 1917, a motor transport allocation section was added. The immediate tasks the MRC faced after seizing power from the Provisional Government were curbing resistance, taking control of essential utilities and government offices, preventing pogroms and looting, and above all, defeating a coup attempt by military cadets and fighting the Cossacks who were sent by Kerensky to retake Petrograd. However, shortly after the insurrection, the MRC found itself dealing with mostly civil administration duties. [12]

By October 28, 1917, the MRC appointed 185 commissars to various civil agencies. The most urgent problem facing the MRC was providing food to the population of Petrograd. After the October insurrection, levels of grain stock in Petrograd were so low that they were insufficient to supply the city with the daily ration of half a pound of bread for even one day. The MRC imposed even stricter food controls and sent “flying food-supply squads” to the other provinces, followed by stiff penalties against possible speculation on the new incoming provisions. [13]

The MRC also took it upon itself to censor the press. In 1917, Petrograd had over 150 newspapers and other periodicals, and 450 journals. [14] In keeping with the first point of Lenin’s three point program concerning the press, the MRC would forcibly close critical publications and handover the facilities to Bolshevik sympathizers (the following two points were a state monopoly on advertising and allocating printing services and supplies to socialist parties and citizen groups in proportion to their size). [15] On October 26, 1917, the MRC in Petrograd shut down seven newspapers that had supported the Provisional Government. During its tenure, the MRC in Petrograd shut down up to five newspapers a day on suspicions of being counter-revolutionary. [15]

Other duties performed by the MRC included political policing against possible counter-revolutionaries, issuing of exit visas and various permits, controlling of foreign trade outlets, censoring of the press, distribution of various goods to both the military and civilian population, allocation of housing, licensing of theatrical performances, etc. [16]

Eventually, many of the duties of the MRC were overtaken by the Council of People’s Commissars that was formed after the October insurrection, as well as other new and/or newly renovated administrative offices. The MRC was officially abolished on December 5, 1917.

In the weeks following the October insurrection, military revolutionary committees based on the MRC of Petrograd were set up throughout the other soviets and helped cement Bolshevik control. These other MRCs were formed by locals but agents from the Petrograd MRC were often in positions to give advice or direction. By the end of October 1917, representatives from the Petrograd MRC were on assignments in at least forty-four cities as well as 113 military units throughout Russia, Turkestan, and the Caucasus. [17]