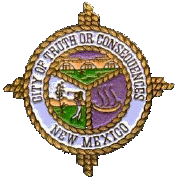 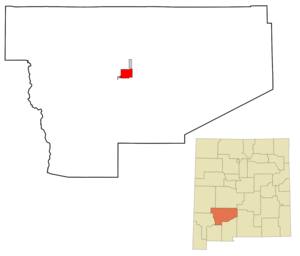 Originally called "Hot Springs", it took the name of a popular radio program in , when "" host announced that he would do the program from the first town that renamed itself after the show. Ralph Edwards came to the town during the first weekend of May for the next fifty years. This event was called the "Fiesta" and included a beauty contest, a parade, and a stage show.

The city is located on the , near .

There are several local .The combined flow of the hot springs complex in Truth or Consequences is estimated at 99 liters/second.

There were 3,450 households out of which 20.2% had children under the age of 18 living with them, 40.5% were married couples living together, 10.3% had a female householder with no husband present, and 46.1% were non-families. 41.2% of all households were made up of individuals and 22.1% had someone living alone who was 65 years of age or older. The average household size was 2.04 and the average family size was 2.75.

The city is a popular tourist destination for New Mexicans. It is also a common retirement location, partly due to low house prices (median $75,000). Outdoor sports such as golf, hiking and fishing are popular.

It is served by .

"Truth or Consequences", a photographic portrait of the town, was published in 2001 by British photographer .

The first bath in the area was built at "John Cross Ranch" over Geronimo Springs in the late 1800s. However, major settlement did not begin until the construction of Elephant Butte Dam and Reservoir in 1912. The dam was completed in 1916. Elephant Butte Dam was a part of the Rio Grande Project, an early large-scale irrigation effort authorized under the Reclamation Act of 1902. In 1916 the town was incorporated as Hot Springs. It became the Sierra County seat in 1937.

Serial killer lived in Truth or Consequences. On , he was sentenced to 224 years in prison for abduction, rape, torture and — in some cases — murder of at least 12 people, although the estimates the total number of victims could be as high as 60.

The town was also the fictional hometown of Cactus Jack, one of the several personas of .