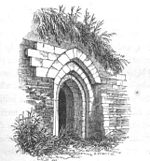 A postern at Northampton Castle.

Northampton Castle was built under the stewardship of Simon de Senlis, the first Earl of Northampton, in 1084. It took several years to complete, as there is no mention of it in the Domesday Book, a great survey of England completed in 1086.

The castle was situated outside the western gate, and defended on three sides by deep trenches. A branch of the River Nene provided a natural barrier on the western side. The castle had extensive grounds and a large keep. The gates were surrounded by bulwarks made of earth, used to mount artillery.

In the reign of Henry II, the castle was in the hands of the Crown. In the civil wars between King John and his barons, the latter used it as a stronghold. When the King prevailed, the castle was entrusted to Foulk de Brent, whom the King admired for his courage during the war.

In 1164, Thomas Becket was tried at the castle before a great council. Having escaped by dressing as a monk, Becket then fled to France.

In 1264, in the wars between King Henry III and his nobles, the castle was owned by the confederate barons and governed by Simon de Montford. When the King defeated the garrison, the castle again reverted to the Crown. It remained so until three years into King Edward III's reign, when Thomas Wake, who was then sheriff of Blisworth, claimed it belonged to the county under his jurisdiction.

In 1452, thirty years into King Henry VI's reign, the castle was rented to Robert Caldecote for 20 years, at the annual rate of £5. The rent of the castle included:

... all the weifs belonging to the constableship of [the castle], and the herbage within the walls, and in the trenches, as also a certain meadow, and right of fishing in the river ...[1]

At the time of the restoration, it was in the hands of Sir Arthur Haselrig, who shared it out to several individuals that set up houses on the trenches. A public chapel dedicated to St. George was set up within the castle.

In 1662, by orders of the King, parts of the castle, as well as the walls and gates of the town, were demolished. Up until 1675, this fortress was used as the county jail, and the two courts of justice were held here.

Up until 1879, the castle's foundations could still be traced on the southern and western sides, and part of a round bastion on the southern side, formerly the prison, was also standing. However in that year the castle and its foundations were demolished by the LNWR for the extension of Castle Station. The only remains now surviving are some earth banks beside St. Andrews Road and the repositioned postern gate embedded into the station wall.

A volunteer group called the Friends of Northampton Castle has been established to publicize the Castle and provide information about the history of the site and the Castle itself.