Mark Thomas Tremonti (born April 18, 1974) is an American musician and songwriter, best known as the lead guitarist of the American rock bands Creed and Alter Bridge. He is a founding member of both bands. He has also collaborated with many other artists over the years and is currently at work on a project with his own band, Tremonti.[1]

Since his early years with Creed, Tremonti has become widely recognized for his technical and songwriting abilities and has received several accolades, including one Grammy Award for Creed's single "With Arms Wide Open."[2] He was also named "Guitarist of the Year" for three consecutive years by Guitar World magazine.[3] In 2011, he was voted as the fourth greatest heavy metal guitarist of all time by Total Guitar.[4]

Tremonti was born on April 18, 1974 in Detroit, Michigan. He grew up in a Roman Catholic family in Grosse Pointe, just outside of Detroit, for most of his childhood life before moving to Wilmette, Illinois.[5] Around this time, he began to become enthralled with music, and bought his first guitar at the age of eleven. When he was fifteen, his family moved again to Orlando, Florida,[3] where he enrolled in Lake Highland Preparatory School. During this time, his mother was diagnosed with systemic lupus erythematosus, which left Tremonti devastated. After graduation, he moved to Clemson, South Carolina to attend Clemson University to major in finance. After his freshman year in college, he moved back to Florida to enroll in Florida State University, where he was reunited with his then future Creed band mate Scott Stapp, whom Tremonti had known in high school.[6]

Tremonti is a founding member of the American hard rock band Creed. He formed the band with lead vocalist Scott Stapp in 1995 with fellow members Brian Marshall and Scott Phillips joining as bassist and drummer, respectively. Rhythm guitarist Brian Brasher was also briefly a member in 1995 when the band was known by its original name, Naked Toddler.[7] While often criticized and parodied, Creed is recognized by many as one of the major acts of the post-grunge movement of the late 1990s and early 2000s. Tremonti and Stapp have been collectively recognized as one of the most prolific songwriting teams in all of rock music.[8]

The band released their debut album My Own Prison in 1997 to mainstream success, selling over six million copies.[9] Four singles were released from the album: "My Own Prison," "Torn," "What's This Life For," and "One." Each of these songs reached #1 on Billboard's Hot Mainstream Rock Tracks chart, making Creed the first band to achieve such a feat with a debut album.[9] My Own Prison was followed in 1999 by Human Clay, which was an immediate success and certified diamond and eleven times platinum by the RIAA.[9] The band released four singles from Human Clay: "Higher," "With Arms Wide Open," "What If," and "Are You Ready." "Higher" spent a record-breaking 17 weeks on the top of the rock radio charts.[10] Marshall left the band in 2000 due to increasing tension with Stapp and to pursue other interests. He was temporarily replaced by touring bassist Brett Hestla.[11] Creed also won their first, and to date only, Grammy Award with "With Arms Wide Open" for Best Rock Song in 2001.[2] That same year, after a tour, the band released another multi-platinum selling album, Weathered,[12] from which six singles were released: "My Sacrifice," "One Last Breath," "Hide," "Don't Stop Dancing," "Weathered," and "Bullets." It would be the band's only album without Marshall on bass; Tremonti handled the bass parts himself. The tour to support this record was overwhelmingly successful but ended with a considerably controversial concert in Chicago that ultimately led to the band's breakup.[13] The band announced that they had disbanded in 2004, citing tension between Stapp and the other members, Tremonti in particular.[14] Creed released their Greatest Hits in November 2004. 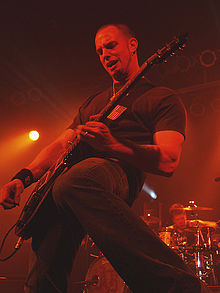 Tremonti performing with Alter Bridge in 2007.

However, after months of speculation, despite early claims from Tremonti that Creed would never return,[15] it was announced that Creed had reunited with plans for a tour and a new album.[16] The record, Full Circle, was released in October 2009 and became the band's only album to not be certified by the RIAA. "Overcome," "Rain," and "A Thousand Faces" were released as singles. Creed supported the album by touring throughout North and South America, Europe, and Australia during the summers of 2009 and 2010.[17] The band also released a record-breaking concert film titled Creed Live in December 2009.[18] A fifth Creed album is expected in late 2011 or early 2012 according to Tremonti.[19]

Alter Bridge was formed in January 2004 by Tremonti, Marshall, and Phillips after Creed disbanded. They asked Myles Kennedy, formerly of The Mayfield Four and the current touring vocalist for Slash's band, to be their singer.[20] The newly formed band released their debut album, One Day Remains, in August 2004 on Wind-up Records. It saw mostly negative reviews, with many critics calling Alter Bridge an offshoot from Creed,[21][22] but the album became Alter Bridge's only RIAA-certified album, going gold.[23] Three singles were released from One Day Remains: "Open Your Eyes," "Find the Real," and "Broken Wings." After a tour, it was followed by a second album, Blackbird, in October 2007 on Universal Republic. Blackbird was met with largely positive reviews and is generally considered by fans to be their best album. It released four singles: "Rise Today," "Ties That Bind," "Watch Over You," and "Before Tomorrow Comes."

Alter Bridge embarked on a successful world tour in support of Blackbird, recording their December 7, 2008 show at the Heineken Music Hall in Amsterdam, Netherlands for a live DVD titled Live from Amsterdam.[24] A single disc version was sold exclusively at venues during the Creed reunion tour in 2009 and on Amazon. A Blu-ray Disc version and a deluxe edition to be sold in stores, however, have been the source of controversy as they have delayed by Universal Republic several times, causing frustration amongst Alter Bridge fans and band members. It was finally released in stores in North America on January 11, 2011 after two years of delays.[25]

Alter Bridge's third album, titled AB III, was released in October 2010 on Roadrunner Records worldwide,[26] with the exception of North America where it was self-released on Alter Bridge Recordings via EMI.[27] The band's first concept album,[28] AB III has been met with critical acclaim,[29] with Rick Florino from Artistdirect calling it a "sprawling masterpiece."[30] Its single, "Isolation," reached #1 on active rock radio and the Hot Mainstream Rock Tracks, the band's first single to do so.[31] The band is currently on tour in support of the new record and will tour with Black Stone Cherry and Like a Storm in the spring of 2011.[32] Two more singles from AB III have since been released: "I Know It Hurts" and "Ghost of Days Gone By." Tremonti, Marshall, and Phillips, owing to the reunion of Creed, now plan to alternate tours between Creed and Alter Bridge with Stapp and Kennedy working on their own projects while the other band is active.

During the time that Creed was at the end of its career in the early 2000s, Tremonti had intentions to form a speed metal side project called Downshifter (with Hatebreed vocalist Jamey Jasta and Slipknot drummer Joey Jordison), but the project never got off the ground.[14] In 2008, Tremonti released a guitar instructional DVD titled Mark Tremonti: The Sound & the Story wherein he teaches all of his guitar solos from Alter Bridge's sophomore release, Blackbird. He also teaches warm-ups, alternate tunings, finger picking style, legato techniques, and other advanced exercises. His DVD includes special guest appearances from Myles Kennedy, Michael Angelo Batio, Rusty Cooley, Bill Peck, and Troy Stetina. The DVD was released exclusively through Tremonti's company, Fret12, an online musicians' community co-founded and owned by Tremonti.[33]

Tremonti has also recently talked about releasing a solo album, tentatively titled The Tremonti Project. "The bands are so different," he said of his two current main projects. "And I write so much. I'm going to do a solo record because there are some songs that I'd hate to think wouldn't see the light of day because they don't work for Creed or Alter Bridge."[1] He will be playing guitar and singing lead on all of the songs himself, and former Submersed members Eric Friedman and Garrett Whitlock will perform on the record as well. As of November 5, 2010, five songs for the album have been written. Tremonti describes the music as "melody driven."[34] In a May 2011 interview, Tremonti said that it will be a "heavier-sounding" thrash metal album.[35]

Producer Michael "Elvis" Baskette, who produced Alter Bridge's previous two albums, announced that he will be working with Tremonti on his solo record. They began the recording process on April 4, 2011 according to Baskette's update.[36] On April 6, 2011, Alter Bridge revealed also on Facebook that tracking for the project has begun.[37] According to Tremonti, the album is to be released in January.[38] In a recent interview, Tremonti has stated that he plans to release his solo record in February 2012.

Tremonti has worked with several artists since his beginning years with Creed, including Sevendust, Fozzy, Larry the Cable Guy, Michael Angelo Batio, and Bury Your Dead. He helped produce several songs on the 2004 Submersed album In Due Time.

On December 14, 2002, Tremonti married Victoria Rodriguez, with whom he has two sons, Austen and Pearson. They currently reside in Orlando, Florida.[6]

Tremonti is an avid collector of guitars and pinball machines. He is also known to enjoy playing table tennis.[6] One of Tremonti's brothers, Michael, is Alter Bridge's fan liaison and publicist.[39] Another brother, Dan, has created the artwork for all of the albums by both Alter Bridge and Creed and is the president and creative director of a design/marketing company called Core 12.[40]

These statistics were compiled from the RIAA certification online database.[41]

The Grammy Awards are awarded annually by the National Academy of Recording Arts and Sciences. With Creed, Mark Tremonti has been nominated for three Grammy Awards resulting in one win.[42]