This article is about the game written for the PLATO computer system; for other uses, see Moria. 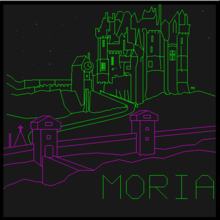 Moria is a dungeon crawl style computer role-playing game first developed for the PLATO system around 1975, with copyright dates listed as 1978 and 1984. It was a pioneering game, allowing parties of up to ten players to travel as a group and message each other, dynamically generating dungeons (instead of pre-computing them), and featuring a wireframe first-person perspective display. One of its authors, Kevet Duncombe, claims not to have read the works of J. R. R. Tolkien or heard of Dungeons & Dragons at the time development started, but he was aware of the PLATO game, dnd.[1] 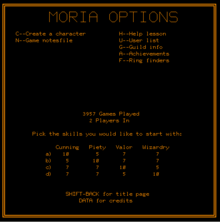 Players create characters who possess skills that describe abilities on a 100-point scale. Cunning affects a character's life expectancy and the odds of evading an attack, tricking or surprising monsters, and opening boxes and chests. Piety affects the success of prayers and some non-battle spells. Wizardry determines which spells can be used and their odds of success. Valor affects what weapons can be used, as well as reducing damage received in combat and affecting success in attacking monsters.

In Moria, character generation is automatic. A player chooses from among four possible skill combinations, each totaling to the same amount. The game does not enforce a rigid notion of character class; characters may use any weapon or spell as their individual skill levels permit.

Score points are given for defeating monsters.

Gold is an important measure of success in the game. The gold piece is the basic monetary unit, with 200,000 pieces of gold measured as one bag of gold.

The dungeons contain certain magic objects. The most notable is the "Ring of the Reaper" which extends character lifespan. Characters who find this ring and defeat its guardian are listed on a hall of fame page. 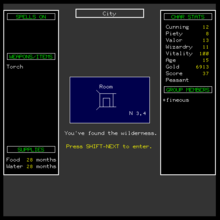 Players start in a town, which has shops where objects can be bought and sold. While weapons may be bought or sold, magic items can only be sold. Players may steal from guild halls, but go to jail if caught, ending the game for those who are not members of a guild.

The town is adjacent to the wilderness area, which contains a few less challenging monsters and not much treasure. The wilderness in turn contains stairs to the four main dungeon areas: cave, mountain, forest, and desert. Despite the naming of these areas, on-screen presentation is identical. Each is sixty levels deep, with staircases leading from one to the next.

Dungeon areas are composed of six by six "blocks", and thus contain 36 spaces potentially occupied by characters or monsters. Blocks contain walls and doors that partition them into corridors and rooms; most blocks will also contain inaccessible spaces. Doors lead both within and between blocks. The coordinate position of a player within the current block is displayed on-screen, along with which of the four cardinal directions the character faces.

Characters require food and water to survive, automatically consuming both with the passage of game time. Once these resources are depleted, the character's Vitality decrements until the player secures new supplies. A player has a limited capacity to carry food and water, which may be purchased in town. Some monsters may be converted to food when killed, and water holes may be found in the dungeons.

Combat and other actions

The game primarily uses single-letter, case-sensitive commands, some of which are mnemonic. The character motion keys are graphically oriented on a QWERTY keyboard; 'a' turns left, 'd' turns right, 'x' turns around, 'w' moves forward, and 'W' moves forward through a door, or until an object is encountered. Many actions, such as object use, will present lists of choices. Some actions make use of special keys found on PLATO terminals.

In combat with monsters, a player has several options:

When players form a party, one acts as "Guide" who has sole control over party movement between areas of the terrain ("blocks"). Several rooms comprise each block, in which players can independently move, loot, combat monsters, and so on. The party cannot leave a block if anyone in the party is fighting. Players in a party may message all players, or one other player privately, in the current room.

Moria features the rather unusual gameplay mechanic of "the magic string", similar in concept to a GPS waypoint. Each player possesses a single string that is tied to a specific dungeon location, to which the player can retrace subsequent steps. Strings cannot cross dungeon levels, and on more advanced levels, monsters will occasionally chew through them, preventing return. While party members may tie individual strings, only the party guide's can be traversed, though other players can follow their individual strings by leaving the party.

A player may establish a camp in the dungeon, which is basically a supply depot where they can store up to sixty bags of gold and sixty months worth of food. The camp can also serve as a teleport point.

The game features four guilds which players can join, each oriented toward a character class: the Thieves Guild, the Brotherhood for clerics, the Union of Knights, and the Circle of Wizards. Once characters possess a level of 20 in the appropriate skill (Cunning, Piety, Valor, and Wizardry respectively), they may pay to join a guild. Guilds offer four levels of membership — apprentice, journeyman, counselor, and master — and moving from one to the next requires greater skill as well as payment in gold. The master of the guild is the guild's active character of the highest skill level.

Joining a guild provides access to a guild locker, which can be used to store items and from which a new character can inherit the items of an old character who has died. Joining also grants characters a special ability. Members of the Brotherhood can heal their party's vitality, knights can behead opponents (a critical hit in gaming parlance) and take less damage, thieves' chances of finding magic objects improves, and wizards can teleport their party to their camp or to the location of another player in the dungeons.