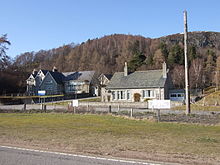 Crathie (Scottish Gaelic: Craichidh) is a village in Aberdeenshire, Scotland. It stands on the north bank of the River Dee.

Abergeldie Castle is a mile away. It was built around 1550 and had nineteenth century additions. It was garrisoned by General Hugh Mackay in 1689.

Crathie is seven miles west of Ballater, but only a half a mile or so east of Balmoral Castle. It is best known for its association with the royal inhabitants of the castle, particularly for their patronage of Crathie Kirk, the parish church. Traditionally many of the estate's workers lived at Crathie.

The hills to the south contain a number of memorial cairns, commemorating Prince Albert and some of his children. John Brown, Queen Victoria's special friend is also buried here.

The Royal Lochnagar Distillery stands on the southern bank of the Dee east of the village. The only producer of a Deeside single malt, it is fed by natural springs rising on the slopes of Lochnagar, a neighbouring Munro.