Air Central Co., Ltd. (エアーセントラル株式会社, Eā Sentoraru Kabushiki-gaisha?) was an airline based in Tokoname, Aichi Prefecture, Japan.[1] It operated passenger services as All Nippon Airways (ANA) flights from its main base is Chūbu Centrair International Airport near Nagoya[2]. On October 1, 2010, Air Central, Air Next and Air Nippon Network were merged together and rebranded as ANA Wings.

A new affiliate company, Nakanihon Airlines (NAL), was founded on May 12, 1988 to handle NAS's scheduled commuter services. It was headquartered in Nagoya Airport and was a joint venture between Nagoya Railroad (55%) and ANA (45%). Commuter services began operations on 23 April 1991. On November 1, 2004, ANA became the majority (55%) shareholder of NAL. As of September 2006, ANA bears 86.7% of the shares of Air Central; and Nagoya Railroad bears 13.3% of its shares.

On February 17, 2005, NAL was renamed to the current name and was relocated to Chubu Centrair International Airport. The flight schedules were amended for convenience of domestic and international flight changeover there. These moves were made for ANA's wish to feed international flights from Centrair operated by ANA and its Star Alliance partners.

As of April 2007, Air Central served the following destinations on the Japanese islands of Honshū, Shikoku and Kyūshū.

Between Fukuoka Airport and: 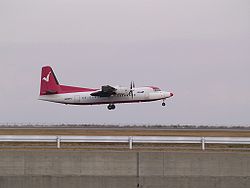