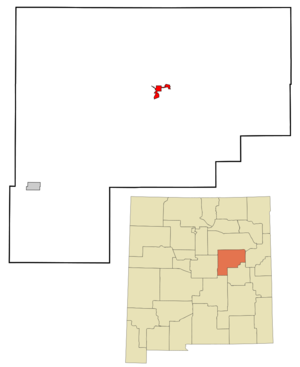 Santa Rosa is a in and the of Guadalupe County, , .GR|6 The population was 2,744 at the 2000 census. It is a small town between Albuquerque and Tucumcari, situated on the at the intersection of , , and State Route 54. The town is in the or "staked plains" of northern .

The first European settlement in the area was Aqua Negra Chiquita, "Little Black Water" in Spanish, in 1865. The name was changed in 1890 to Santa Rosa, Spanish for "Holy Rose", referring to a chapel that , the founder of the town, built and named after either his mother Rosa or . The "Rosa" may also refer to the roses in the story of and is indicative of the Catholicism of the Spanish colonizers who settled in the area.

Santa Rosa was connected by to , El Paso, and the world at large in the early 1900s.

Santa Rosa's stretch of is part of film history. When 's epic novel, "", was made into a movie, director used Santa Rosa for the memorable scene. Tom Joad () watches a freight train steam over the Pecos River railroad bridge, into the sunset.

Santa Rosa has many natural lakes, an anomaly in the dry climate surrounding it. These are s that form in the bedrock of the area and fill with water, and thus the lakes are connected by a network of underground, water-filled tunnels. The most famous of these is Blue Hole, a popular spot for , where frigid 64°F (18°C) water forms a lake over 81 ft (25 m) deep.

There were 898 households out of which 35.0% had children under the age of 18 living with them, 45.1% were married couples living together, 18.3% had a female householder with no husband present, and 31.3% were non-families. 28.0% of all households were made up of individuals and 11.2% had someone living alone who was 65 years of age or older. The average household size was 2.50 and the average family size was 3.03.