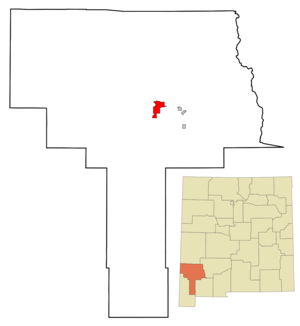 mapsize = 250px
map_caption = Location in the State of

The site of Silver City was originally known as San Vicente de la Ciénega (St. Vincent of the Marsh), and prior to Anglo settlement, the valley served as an campsite. With the arrival of a wave of American prospectors in the 1860s, however, the face of the valley soon changed.

Silver City was founded in the summer of 1870, shortly after the discovery of silver ore deposits by Captain John M. Bullard at Chloride Flats, located on the hill just west of the farm of Captain Bullard and his brother James. Following the silver strike, Captain Bullard laid out the streets of the new Silver City on the former farm, and a bustling tent city quickly sprang to life. Although the trajectory of Silver City's development was to be different from the hundreds of other mining boom towns established during the same period, Captain Bullard himself never lived to see even the beginnings of permanence, as he was killed in a confrontation with Apache raiders less than a year later, on , .

The towns violent crime rate was substantial during the 1870s, Grant County Sheriff was elected in 1874, and gained a sizable reputation for his abilities at controlling trouble. In 1875, Whitehill became the first lawman to arrest , known at the time as William Bonney. Whitehill arrested him twice, both times for theft in Silver City, and would later claim that Bonney was a likeable kid, whose stealing was a result more of necessity than criminality. In 1878 the town hired its first town marshal, "Dangerous Dan" Tucker, who had been working as a deputy for Whitehill since 1875. Tucker killed several men during his rein as marshal, and is one of twelve gunmen included in the book "Deadly Dozen" by Robert K. DeArment, who proclaims Tucker as one of the most underrated gunmen of the . He was also the subject of the "Dangerous Dan" Tucker, New Mexoco's Deadly Lawman", by author Bob Alexander.

Mrs. Lettie B. Morrill, in a talk given to the chapter in Silver City on , , stated, "John Bullard was placed in the first grave dug in Silver City, having been killed while punishing the Indians for an attack upon the new town; the brothers were Prospectors about the country for many years. The last one left for the old home about 1885, saying, ‘It is only a matter of time until the Indians get me if I stay here.’" It was also known as the starting point for many expeditions hunting treasures such as the . [http://www.salars.net/2006/05/26/the-lost-adams-diggings-part-i] Old mines, camps, and shacks dot the hills, and it is rich in [http://www.salars.net/category/sw-history/ Old West History] .

In 1893 the Normal School was established. It later was renamed to in 1963. Today, WNMU offers 8 graduate degrees, 41 baccalaureate degrees, and 18 associate degree and certificate programs. The WNMU athletic team is referred to as the Mustangs. Recognition for the university includes the 2003 Zia Award, the 2005 Best Practice Award (for the School of Education), the 2006 Chamber of Commerce Large Business of the Year Award, the 2008 Pinon Award, and the 2008 Companero Award.

The local geology of the Silver City area is complex. Sedimentary gravels are found in the form of alluvial gravels called the Mangus Valley gravels. Metamorphic schist and gniess is also found. The downtown area is mostly comprised of granite outcrops.Silver City lies just east of the continental divide.

There were 4,227 households out of which 30.0% had children under the age of 18 living with them, 44.6% were married couples living together, 15.4% had a female householder with no husband present, and 35.4% were non-families. 30.3% of all households were made up of individuals and 11.9% had someone living alone who was 65 years of age or older. The average household size was 2.40 and the average family size was 3.00.

Silver City was founded as a mining town, and the nearby mining operations of are still the basis for the local economy. In 2006, the Chino and Tyrone mines produced 125,400 tons of copper. Mine employment was 1250, with wages and salaries totaling $73 million. However, a Phelps-Dodge spokesman recently remarked that "based on current economic projections, our properties in New Mexico will not be operating in 25 years" [New Mexico Business Journal, 9-07, p. 31 ] . Phelps-Dodge was acquired by international mining firm in March, 2007, and operations at the Chino and Tyrone operations are continuing under the Freeport name.

Despite its small population, the town prides itself on its ability to bring in high quality cultural offerings, including the Grant County Community Concert Association, which presents numerous events each year [ [http://www.silvercity.org/search_detail.mvc?CID=9LTZ3B9335 Grant County Community Concert Association, another outstanding Chamber member and business in Silver City, NM! ] ] .