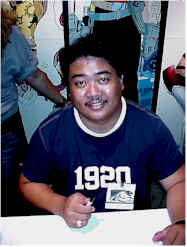 Born in Sangley Point, , , Portacio started out as an at in 1985. Later he was given assignments as a as well. Portacio became noted for his work on such titles as "The Punisher", "X-Factor", and the "". However, in 1992, Portacio left Marvel to co-found with six other high-profile artists. he quickly withdrew from Image, however, due to his sister's illness. He eventually published his title "" through 's imprint in 1994. Other notable series that Portacio has worked on include "" and Marvel's controversial storyline within "".

In August, 2000, Portacio fell into a as a result of a failing . He woke up a week later, thirty pounds lighter, and unable to walk, stand or even draw. Only six months later he was able to pick up a pencil and draw. According to his blog, "My mind could see what I wanted to draw but my hand couldn't accomplish it." [citeweb |url=http://whilcewetworks.blogspot.com/2006/12/hey-people.html |title=Wetworks:The Creative Process |author=Whilce Portacio |month=December 6 |year=2006 |accessmonthday=April 30 |accessyear=2007]

In 2006, Portacio returned to his artistic duties at Wildstorm on "Wetworks" vol. 2, which was being written by . Unfortunately, Portacio's reputation for being unable to maintain a steady work schedule caught up with him again as "Wetworks "vol. 2 suffered from numerous delays and Portacio ended up leaving the book with issue #6, but he continues to illustrate cover art monthly since leaving as the book's interior artist. Fact|date=April 2007 The new "Wetworks" series was short-lived though, lasting only 15 issues. He also began art duties on the new monthly series "".

On June 9, 2008 it was announced that Portacio would be the new artist on "Spawn" starting in October 2008 with issue #185, providing pencils with "Spawn" creator returning as co-writer with as the new creative team.