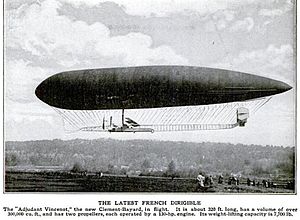 The "Adjudant Vincenot" circa 1910. Caption from Popular Mechanics magazine 1910

The Clément-Bayard No.1 was a French military airship of 1908, developed by automobile manufacturer Clément-Bayard in response to a French Army decision of that year to commence airship operations. The firm contracted Astra to build the envelope, while it built the gondola and engines itself. The envelope's distinctive design featured four large lobes at the aft end, intended to provide directional stability. Testing commenced on 28 October with Henry Kapferer at the controls. By the end of the year, the airship had made nearly thirty flights, including long-range cross-country sorties of up to 200 km (120 mi), breaking the national aerial endurance and speed records.

In 1909, the airship was offered for sale to the French government, with an asking price of FF 500,000. However, this was considered too expensive, and the offer was declined. Later that year, Tsar Nicholas II decided to buy it for the Russian army. On 23 August, it was demonstrated for a Russian military delegation in Paris. In front of the observers, the airship was piloted by Louis Capazza first to a record altitude of 1,200 m (4,000 ft) and then hours later to a new record of 1,550 m (5,080 ft). Upon landing, however, Capazza cut power to the engines before the ground handlers had full control of the craft. A gust of wind carried it into a grove of trees, lacerating the envelope and resulting in the airship sinking into the Seine. It was, however, successfully salvaged and repaired, and went on to serve with the Russian Army under the name Berkut ("Eagle").