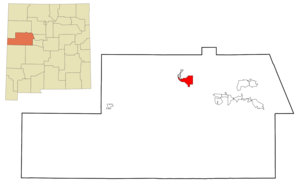 Grants began as a railroad camp in the 1880s, when three Canadian brothers were awarded a contract to build a section of the new Atlantic and Pacific Railroad through the region. The Grant brothers' camp was first called Grants Camp, then Grants Station, and finally Grants.

The town prospered as a result of railroad logging in the nearby Zuni Mountains, and served as a section point for the Atlantic and Pacific, which became part of the Atchison, Topeka, and Santa Fe railroad empire. The Zuni Mountain Railroad short line had a roundhouse in town (near present day Exit 81 off Interstate 40) and housed workers in a small community named Breecetown. Timber from the Zuni Mountains was shipped to Albuquerque where a large sawmill converted the timber to wood products that were sold around the west.

After the decline of logging in the 1930s, Grants gained fame as the "carrot capital" of the United States. Agriculture was aided by the creation of Bluewater Reservoir, and the region's volcanic soils provided ideal conditions for farming. Grants also benefited from its location on , which brought tourists and travelers and the businesses that catered to them.

Perhaps the most memorable boom in the town's history occurred when , a Navajo shepherd, discovered ore near Haystack Mesa, sparking a mining boom that lasted until the 1980s (see ). The collapse of mining pulled the town into a depression, but the town has enjoyed a resurgence based on interest in tourism and the scenic beauty of the region.

According to the , the city has a total area of 13.7 s (35.4 ), all of it land. Grants is on the north end of the large and recent (youngest flows around 3,000 years old) lava field of . To the northeast of town are the San Mateo Mountains and , the highest peak in the region. West of the city is the Continental Divide and the Zuni Mountains, an eroded anticline with 2 billion year old precambrian granites and metamorphic rocks at its core. The region is primarily high desert country, dominated by sandstones and lava flows.

There were 3,202 households out of which 37.5% had children under the age of 18 living with them, 49.5% were married couples living together, 17.1% had a female householder with no husband present, and 27.5% were non-families. 24.1% of all households were made up of individuals and 8.5% had someone living alone who was 65 years of age or older. The average household size was 2.61 and the average family size was 3.06.

All public schools in the county are operated by .

is the only private accredited school in Grants and serves grades Pre-Kindergarten through Eighth Grades.

There is a branch of . The branch offers a two-year postsecondary program as well as advanced degrees through distance education.

Author has stated that, in his novel "On Second Thought", the town of Alamitos is based on Grants, NM, which is the historical name before it was renamed after the mining camp. [ [http://www.robisonwells.com/OTSquestions.php#OTS3 Questions about On Second Thought ] ] Wells lived in Grants during the late 1990s. Scenes from the movie "21 Grams" starring Sean Penn and Naomi Watts were also filmed in Grants. In the book "Flint", Los Alamitos (Grants) and the nearby El Malpais provided some of the settings for the main character in the book.