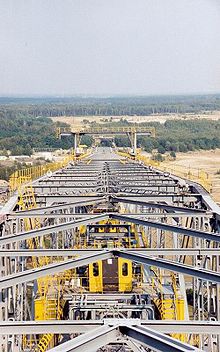 The F60 in Lichterfeld, along the entire length

F60 is the series designation of five overburden conveyor bridges used in brown coal (lignite) opencast mining in the Lusatian coalfields in Germany. They were built by the former Volkseigener Betrieb TAKRAF in Lauchhammer and are the largest movable technical industrial machines in the world. As overburden conveyor bridges, they transport the overburden which lies over the coal seam. The cutting height is 60 meters, hence the name F60. With a length of 502 meters, it is described as the lying Eiffel tower. In total, the F60 is up to 80 m high and 240 m wide. In operating condition, it weighs 13,600 metric tons.

The F60 has two bogies (chassis with wheels), one on the dumping side (front) and one on the excavating side (back), which each run on two rails (standard gauge). In addition to the two rails on the excavating side, there are another two rails for the transformer and cable cars. There are a total of 760 wheels on the bogies, of which 380 are powered. The maximum speed of the F60 is 13 m/min (0.78 km/h) and the operating speed is 9 m/min (0.54 km/h).

The F60 has two excavators of type ES 3750 on the sides to do preparatory work (see the panoramic photograph from the Jänschwalde mine), one each on the northern and southern crosswise conveyor. They each have an output of 29,000 m³/h (50,000 t), which corresponds to a volume the size of a soccer field with a depth of 7–8 m. There are nine various overburden conveyor belts with a speed of 10 m/s.

The F60, including the two excavators, requires 27,000 kW of power. The bridge needs 1.2 kWh of electricity to convey a cubic meter of overburden, from the crosswise conveyors up to the dumping at a height of 75 m.

The overburden conveyor bridge of Lichterfeld-Schacksdorf, now shut down, was used from 1991 until 1992 in the brown coal mine Klettwitz-Nord near Klettwitz. It is open for visitors today as a project of the Internationale Bauausstellung Fürst-Pückler-Land (International Mining Exhibition Fürst-Pückler-Land) and is an anchor of the European Route of Industrial Heritage (ERIH).

This F60 is the last of five F60s. The installation was carried out between 1988 and 1991 in the Klettwitz-Nord opencast mine. The F60 began operation in March 1991. Between its commission and its shutting down in June 1992, it moved around 27 million cubic meters of overburden. After the German reunification, the mine became the responsibility of the Lausitzer und Mitteldeutsche Bergbau-Verwaltungsgesellschaft (Lusatian and Middle-German Mining Administrative Society, LMBV), which closed the mine on the orders of the German federal government and renovated it economically and in a way not harmful to the environment.

Between 2000 and 2010, the Internationale Bauausstellung Fürst-Pückler-Land is pursuing the goal of giving new momentum to the region and the former opencast mine of Klettwitz-Nord has also been integrated into that concept. The mine has been converted into a 'visitors' mine' and the conveyor bridge has been accessible since 1998. Various sound and light installations help make the facility an attraction for visitors.