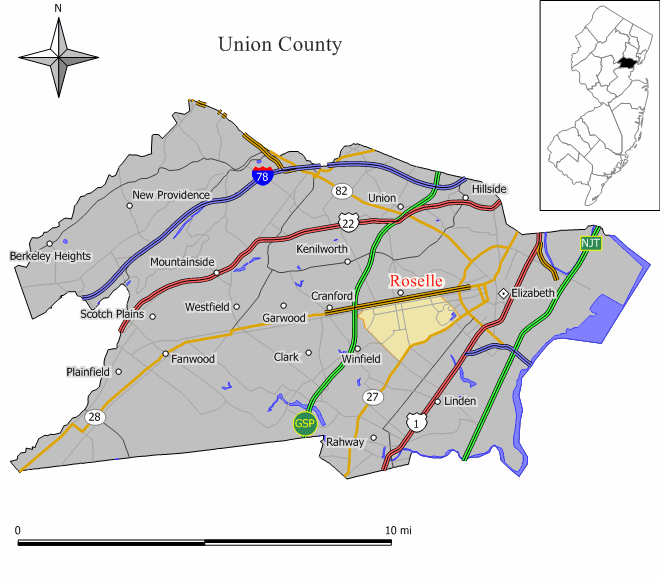 On , , the first electric lighting system employing overhead wires began service in Roselle, and was built by , as part of an experiment to demonstrate that an entire community could be lit by electricity. The [http://www.rosellechurch.org First Presbyterian Church] , located on the corner of West 5th and Chestnut, was the first church in the world to be lit by electricity.

Roselle was incorporated on , , at the height of the "" phenomenon sweeping through New Jersey at the time, based on the results of a referendum held two days earlier, from portions of Linden.

The borough is bordered by Roselle Park to the north, Elizabeth to the east, Linden to the south and Cranford to the west.

There were 7,520 households out of which 32.2% had children under the age of 18 living with them, 45.3% were married couples living together, 18.8% had a female householder with no husband present, and 30.5% were non-families. 25.2% of all households were made up of individuals and 9.9% had someone living alone who was 65 years of age or older. The average household size was 2.82 and the average family size was 3.41.

Roselle is incorporated under the Borough system of municipal government. The governing body is the Borough Council which is made up of six members and a mayor. The mayor and council representative-at-large are elected by the entire borough. The remaining five council members are elected from five wards, one from each ward in which the member resides. The Mayor is elected directly by the voters to a four-year term of office. The Borough Council serve three-year terms on a staggered basis, with two seats coming up for election each year.

Roselle has the "weak" mayor-council form of government. The mayor has less control and the council more over fiscal operations and the appointment and removal of executive officers. The mayor has no vote except in case of a tie. The mayor can veto legislation, but the veto can be overridden by two-thirds vote of the council.

A borough administrator, appointed by the Borough Council, tends to the day-to-day operations of the municipal government.

Portions of Roselle are part of an . In addition to other benefits to encourage employment within the Zone, shoppers can take advantage of a reduced 3½% rate (versus the 7% rate charged statewide). [ [http://www.state.nj.us/njbusiness/financing/tax/geographic.shtml#2 Geographic & Urban Redevelopment Tax Credit Programs: Urban Enterprise Zone Employee Tax Credit] , State of . Accessed , .]

's freight-only Lehigh Line passes through the community along the tracks of the former . The town once shared a passenger station with Roselle Park on the mainline of the . That line is abandoned.

The passed through the community but is currently out of service.

is approximately six miles from Roselle.

Notable current and former residents of Roselle include:
* (1725-1794) A founding father of the United States of America and a signer of the . [ [http://www.nps.gov/history/history/online_books/declaration/bio7.htm Biographical Sketches: Abraham Clark] , . Accessed , . "Clark was stricken with a sunstroke in 1794 at his birthplace in Roselle, where he had lived all his life except when political duty called him away."]
* (1951-), represented the 20th legislative district in the until being forced to suddenly resign after child pornography was discovered on his computer. [ [http://votesmart.org/bio.php?can_id=4205 Assembly Member Neil M. Cohen] , . Accessed , .]
* (1984-), signed by the as an in 2007. [ [http://tarheelblue.cstv.com/sports/m-footbl/mtt/holley_jesse00.html Jesse Holley] , University of North Carolina. Accessed , .]
* (1976-), professional poker player. [ [http://www.worldpokertour.com/magazine/index.php?x=detail&aID=390 "Phil Ivey: From fake ID-wielding hustler to poker superstar, Phil Ivey has come a long way. Tom Bailey tracks his astounding progress."] , "The Official Magazine". Accessed , . "Phil was born in Riverside, California, but the Ivey family upped sticks and relocated in Roselle, New Jersey when he was three months old."]