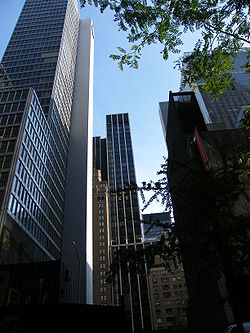 The building would be squeezed between the Financial Times Building on the left and the American Museum of Folk Art on the right.

Tower Verre,[4] also known as the MoMA Expansion Tower and 53 West 53rd Street, is a supertall skyscraper proposed by the real estate company Hines to rise in Midtown Manhattan, New York City adjacent to the Museum of Modern Art.[3]

The building, designed by Jean Nouvel, initially was proposed to stand 1,250 feet (381 m) tall (the same height as the Empire State Building below its mast) and contain 82 floors.[2]

The mid-block building has run into considerable opposition focusing on fears that it would cast a shadow over Central Park during the winter and that its mid-block location would create traffic problems.[5] Further the building does not have financing.[6]

The building bought air rights from the University Club of New York and St. Thomas Church.[7]

The building's skin would contain a faceted exterior that tapers to a set of crystalline peaks at the apex of the tower.[3][12] Due to this, the project is said to be one of the most exciting additions to New York's skyline in a generation.[3]