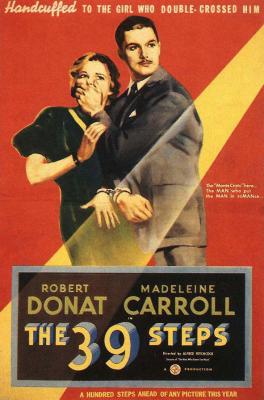 "The 39 Steps" is a play adapted from the 1915 novel by and the 1935 film by . wrote the adaptation, based on the original concept by Simon Corble and Nobby Dimon of a two-actor version of the play. Barlow had originally intended to portray the character of Richard Hannay, but focused solely on rewriting the original version.

The play had its U.S. premiere at the Huntington Theatre () on . [cite news | author=Louise Kennedy | title=Hitch a ride | url=http://www.boston.com/ae/theater_arts/articles/2007/09/21/hitch_a_ride/ | work=Boston Globe | date=21 September 2007 | accessdate=2008-04-04] Titled "Alfred Hitchcock’s The 39 Steps", it opened in New York City on Broadway in a production at the , with previews beginning 4 January 2008 and the official first night on 15 January 2008. The initial run concluded on 29 March 2008, and transferred to the as of April 29, 2008. Aitken also directed the USA productions, and Edwards transferred to the USA productions as Richard Hannay, the only actor from the UK cast to do so. The other actors in the premiere US productions are , Arnie Burton and Cliff Saunders. Edwards concluded his run in the show on 6 July 2008, and has taken over the role of Richard Hannay. [cite news | author=Robert Simonson | title=Charles in Charge | url=http://www.playbill.com/features/article/118353.html | work=Playbill | date=4 June 2008 | accessdate=2008-06-14] [cite news | author=Kenneth Jones | title=Sam Robards Is the Next Pursued Man of Broadway's "39 Steps" | url=http://www.playbill.com/news/article/118367.html | work=Playbill | date=4 June 2008 | accessdate=2008-06-14] It is one of only three Broadway plays, including "" & "", currently enjoying an open ended run.

The play shares the plot and characters with the film. However, the play is a more comic treatment of the story, in the style of and Barlow's own , [cite news | author=Paul Taylor | title="The 39 Steps", Tricycle Theatre, Kilburn, London | url=http://www.independent.co.uk/arts-entertainment/theatre/reviews/the-39-steps-tricycle-theatre-kilburn-london-411991.html | work=The Independent | date=15 August 2006 | accessdate=2008-04-06] compared to the original and more serious film. The play incorporates references and use of music excerpts from other Hitchcock films. As well, the cast of 4 actors portrays between 100 and 150 roles, including actors doubling parts within the same scene. The part of Richard Hannay is the only one where the actor does not double in another role in the play.