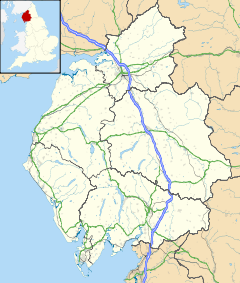 Ninekirks
Ninekirks, between Penrith and Appleby in Westmorland, shown within Cumbria. 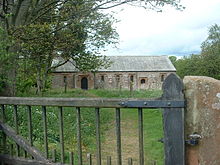 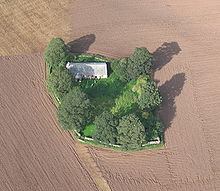 Ninekirks (Church of England), dedicated to Saint Ninian, was formerly the parish church of Brougham, Cumbria. It is situated on the south bank of the River Eamont near its confluence with the River Eden.

The Ninekirks site has been continuously occupied since at least Roman times (Simpson, 1958). The current church building is Grade 1 listed.[1] It is one of very few to be built during the Commonwealth of England and has been altered very little. (Three other churches of this age are: Church of the Holy Trinity, Berwick-on-Tweed; St Matthias Old Church, London Borough of Tower Hamlets; and Staunton Harold, Leicestershire.)

Before the Norman conquest of England

The Ninekirks Hoard of barbarous radiate coins (Casey, 1978) demonstrates Roman occupation of site. The area was associated with St.Ninian from a very early date (Lees, 1879) but "not everyone is convinced entirely by the arguments of Canon Bouch and others for Ninian" (Jones, 1973). There are caves nearby on the north bank of the Eamont at a site called Isis Parlis and possible evidence of occupation of these is used to support arguments in favour of early hermit use.

From the Norman Conquest to Lady Anne Clifford's reconstruction

From reconstruction to the present day

Ninekirks tended to be used when Brougham Chapel was unavailable. For example, from 1764 until the 1840s Ninekirks was used for weddings because Brougham Chapel was in need of repair work. Ninekirks was itself repaired in the 1840s. The porch was added in 1841 (RCHM, 1936) and tombs within the church were excavated in 1846 when the church was being repaired. According to Brougham (1847) these included those of Udard (or Odard) de Broham (died c.1185) and Gilbert de Broham (died c.1230). Despite the repair work, the church was poorly maintained when George Shaw visited in 1847 (Shaw, 1848).

The church had a brief golden age in the early 1950s when the Rector was Canon Bouch. His publications in the Transactions of the Cumberland and Westmorland Antiquarian and Archaeological Society (1947, 1950 and 1955 (twice)) demonstrate his interest. It was made redundant in 1977 (Herald, 1976) and now in the care of the Churches Conservation Trust.

The church and its area have been the subject of at least four archaeological investigations: