The 4th Duke of Rutland

He was educated at Eton and Trinity College, Cambridge, graduating the latter with a nobleman's MA in 1774.[1] That year, he was elected to one of the university's seats in the House of Commons. He continued to maintain the family's substantial electoral interests, and to collect objets d'art to decorate Belvoir Castle. He pledged to redeem his father's substantial debts, but was hampered by his passion for gambling.

On 26 December 1775, he married Lady Mary Isabella Somerset (d. 1831), daughter of Charles Somerset, 4th Duke of Beaufort and a celebrated beauty. They had six children: 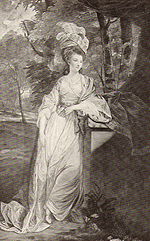 Later in life, he was said to have been the lover of Elizabeth Billington.

Granby entered parliament in opposition to the North Ministry and as an ally to the Rockingham Whigs. He acted only as an observer until reaching his majority, and made his maiden speech on 5 April 1775, advocating free trade with the southern American Colonies. The speech brought him thanks from his father's friend Chatham, whom he praised, and initiated a friendship with William Pitt the Younger. It much disappointed the Court, and particularly Lord Mansfield, who had thought to govern the young Granby. During the American Revolution, he followed Chatham in urging reconciliation with America, and was one of those who questioned the conduct of Admiral Keppel in March 1779. He did not follow this up, and does not seem to have spoken in Parliament afterwards, acceeding to the dukedom on 29 May 1779. He was able to obtain a seat for his friend Pitt at Appleby in 1780 when Pitt failed of re-election for Cambridge University, and promised him a seat in one of the boroughs of the Rutland interest in the future. His own Parliamentary interest notwithstanding, he supported Pitt's plans for reform.

The 4th Duke of Rutland

With the entry of the French into the war, he became colonel of the Leicestershire militia, and was created Lord Lieutenant of Leicestershire on 9 July 1779, an honor bestowed by George III in person. On 30 October 1782, he was made a Knight of the Garter and was made Lord Steward of the Household[2] and sworn of the Privy Council on 17 February 1783. Shelburne thus brought him into the cabinet; but the appointment met with royal disfavor and prompted the resignation of Grafton and the collapse of the ministry. Rutland was by now an ally of Pitt, and upon his premiership, became Lord Privy Seal in December 1783.

Rutland was made Lord Lieutenant of Ireland on 11 February 1784. He was enthusiastic for Pitt's Irish policy and the union which it entailed, but became increasingly doubtful of its implementation. In 1785, Pitt and Rutland successfully worked a trade plan through the Irish Parliament, initially against the opposition of Henry Grattan and Henry Flood. However the Foxite opposition in the British House of Commons so gutted the measure with amendments that it was rejected in its new form in Ireland. While the Irish opposition was later reconciled to Pitt's bona fides with regard to trade, the episode demoralized Thomas Orde, the Chief Secretary of Ireland, and further hindered efforts at reform.

Rutland was increasingly popular as viceroy, in part because of his convivial nature and ample banquets at Dublin Castle. In summer 1787, he made an extended and rigorous tour of the midlands and north of Ireland, but his excessive consumption of claret was by now taking a toll upon his health. He died of liver disease on 24 October 1787 at Phoenix Park Lodge.