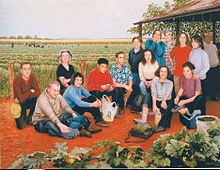 The portrait in oils "Taking a break in the field" by Josonia Palaitis (130x170cms) depicts the 15 backpackers killed in the Childers fire. 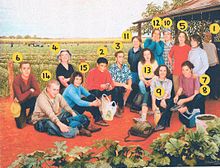 The numbers identify the people killed.

The Childers Palace Backpackers Hostel fire on 23 June 2000 killed 15 backpackers: nine women and six men. The hostel in the town of Childers, Queensland, Australia, is popular amongst backpackers for its fruit picking work.[1][2] Robert Paul Long was arrested for lighting the fire and charged with murder (two counts) and arson (one count). He was later sentenced to life in prison.[3]

The people killed in the fire were:

The fire was started at about 1 am, apparently in the downstairs recreation room, but most of the backpackers who died were on the second floor of the hostel.[4] The timber hostel did not have working smoke detectors or fire alarms. Local firefighters raised a ladder to allow some people to escape. The 69 traumatised backpackers who survived the fire were housed locally — the Isis Cultural Centre became the recreational, food and communication centre for them.

The Princess Royal visited Childers on 2 July, just a week after the blaze, to meet the surviving backpackers and others involved in the disaster.

Bill Trevor, the Isis Shire Mayor, travelled to England and the Netherlands in October 2001 to consult the bereaved families about the memorial proposals. He negotiated to rebuild the Palace in its original early-1900s style.

The Queensland artist Sam Di Mauro made a 7.7-metre-long glass memorial wall that was set into the new building.

The Sydney artist Josonia Palaitis was selected to paint portraits of those killed. She said it was "the most technically challenging and emotionally charged portrait I've ever undertaken".[5] The artist's greatest challenge was to suitably portray the youngsters from the photos of them provided by their families: she managed to arrange them while maintaining the precise poses of those photos. The background was researched by her to be typical of the Isis area fields where they had worked picking crops. "The response to the artwork was overwhelming with families ecstatic with the result."[6]

Some 250 invited guests, including many members of the families of the dead from around the world, attended the official opening on 26 October 2002. Frank Slarke, the father of murdered twins Stacey and Kelly read a poem he wrote as a eulogy.[7][8]