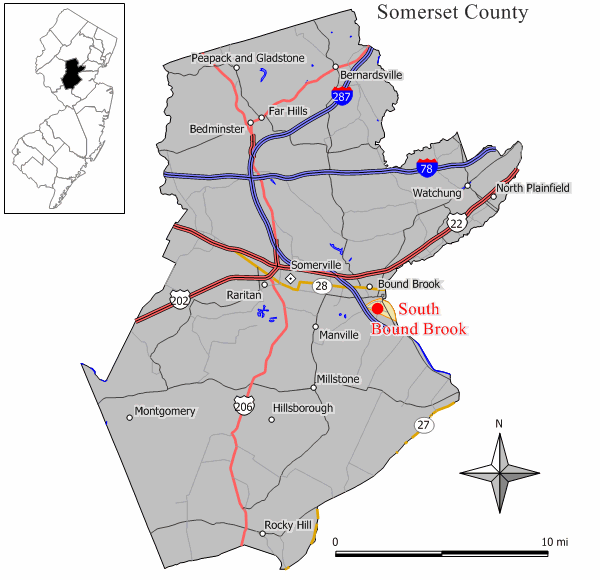 South Bound Brook is a Borough in Somerset County, , . As of the , the borough population was 4,492.

There were 1,632 households out of which 31.3% had children under the age of 18 living with them, 51.0% were married couples living together, 10.8% had a female householder with no husband present, and 32.4% were non-families. 25.1% of all households were made up of individuals and 8.0% had someone living alone who was 65 years of age or older. The average household size was 2.75 and the average family size was 3.31.

South Bound Brook is governed under the Borough form of New Jersey municipal government. The government consists of a Mayor and a Borough Council comprising six council members, with all positions elected at large. A Mayor is elected directly by the voters to a four-year term of office. The Borough Council consists of six members elected to serve three-year terms on a staggered basis, with two seats coming up for election each year.

The serves public school students in kindergarten through eighth grade. Robert Morris School had an enrollment of 490 students as of the 2005-06 school year. [ [http://nces.ed.gov/ccd/schoolsearch/school_list.asp?Search=1&DistrictID=3415180 Data for the Robert Morris School] , . Accessed , .]

For grades 9-12, public school students attend in Bound Brook, as part of a with the .

The South Bound Brook Fire Department has been in existence for over 100 years. They currently have four pieces of apparatus at their Edgewood Terrace Headquarters: One E-One Engine, one E-One 75' ladder, a new Seagrave Rescue/Pumper and one Chevy Blazer for a Chief's vehicle. Their Chief is currently Matthew Tomaro.

The South Bound Brook Office of Emergency Management is a growing department of five personnel. Originally the Civil Defense Board, the Office of Emergency Management is charged with Emergency Preparedness and Planning. They are also responsible for the emergency operations plan, which is updated yearly by all departments of the borough. During major emergencies, they play a significant role in recovery efforts. They are also charged with borough compliance in the . Their coordinator is Paul Kaminsky.

Originally part of Franklin Township and named Bloomington, South Bound Brook was incorporated as a borough by the in 1907.

The area was originally a Dutch community with apple orchards and just west peach orchards. The Von Steuben house (1600?), located on the south side of Main Street, served as the headquarters of Baron Von Steuben during the . The house today is privately owned.

The Reformed Church, also on Main Street (near borough hall) was built in 1848 and has been declared a local historical site by the borough council. Originally called the Dutch Reformed Church of Bound Brook it has gone through very few changes over the years. The one sad removal was a pipe organ received from ; and the stained glass windows, which had been added well after the original construction.

In the mid-1970s a teen from the town created a plan for an environmental commission and presented it to the council. James Manning got his commission and the first order of business was to find out what the white piles of waste on the tow path between the and consisted of. It turned out to be 17% crystal by volume. Since there was no New Jersey State regulation for the disposal, this became a landmark case. The waste was hauled in dump trucks through Bound Brook to the south of West Main Street and dumped. A trail of asbestos dust led from the old dump site to the new dump location.

The main downtown street in South Bound Brook, known as Main Street, has been refurbished with new sidewalks, lighting, signage and a number of newly renovated stores.

A roofing material manufacturing facility known as GAF Manufacturing was located in South Bound Brook for over a century along Main Street. The site was dormant for about two decades and sat as an eyesore and reminder of the town's industrial past. New have been built on the GAF Manufacturing site, along the Delaware and Raritan Canal, which provide the downtown area a new modern look and many new residents.

Part of the redevelopment is being held up by a lawsuit by John Fanaro of Fanaro Carpeting over the right of , as the town tries to seize property along Main Street that is in front of the new townhomes. The redevelopment plan called for the older stores to be razed and replaced with new stores that had parking in back and a dozen rental apartments on the second floor.

A new 55 and older condominium development is also being built along Elizabeth Avenue in the central part of town.

The main attraction in South Bound Brook is the , which forms the northern and eastern boundaries of the town. The canal and its are used for numerous recreational purposes from light boating to hiking and biking. Also of note is the which lies on the far side of the canal and provides further recreational opportunities such as boating and fishing. The Queens Bridge crosses the canal and river, connecting to Bound Brook.

The is a proposed path that would link Branchburg Township to the with the Delaware and Raritan Canal trail in South Bound Brook.

is headquartered in South Bound Brook. , St. Andrew's Memorial Church, and a large Ukrainian Orthodox cemetery, where graves of many politicians from the era can be visited, are located on the south side of the town. [ [http://www.uocofusa.org/history/ AN OUTLINE HISTORY OF THE METROPOLIA CENTER OF THE UKRAINIAN ORTHODOX CHURCH OF THE USA] , . Accessed , .]

, which provides access and connections to large parts of New Jersey and New York is located very near the western boundary of South Bound Brook and provides two local interchanges.

provides frequent train service on the to/from Newark and New York via the nearby Bound Brook Train Station, which is about a five to ten minute walk from downtown South Bound Brook.

NJ Transit bus service to the in is provided on the 114 and 117 routes, with service to Newark available on the 65 and 66 bus lines. [ [http://www.njtransit.com/sf_tp_rc_somerset.shtml Somerset County Bus/Rail Connections] , . Accessed , .]