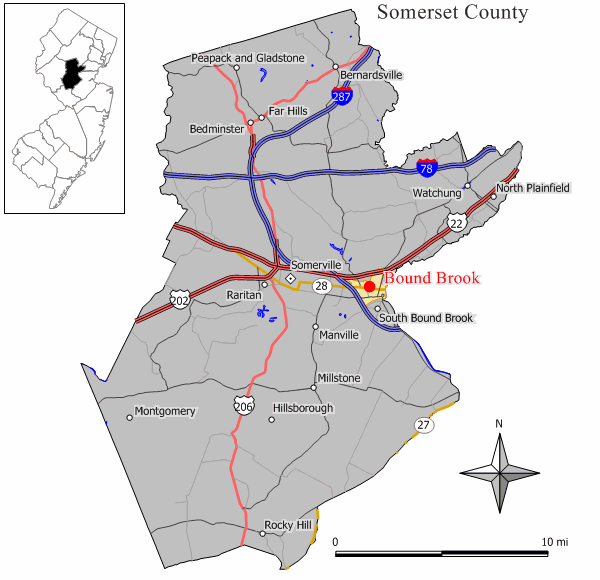 Bound Brook was originally incorporated as a town by an Act of the on , , within portions of Bridgewater Township. On , , it was incorporated as a borough, based on the results of a referendum held on the previous day.

The town was first settled in 1681, and was established near the Bound Brook stream of the same name, which flows into the Raritan River via the on the east side of the borough. [ [http://www.raritanlanding.com/voices/places.htm A Note About Places] , From "Voices of Raritan Landing", accessed , .]

The , one of the battles in the during the , occurred on , , and resulted in a defeat for the , who were routed by about 4,000 troops under British command.

As the southern portion of the borough (including the downtown area) is a low-lying natural of the , Bound Brook suffers occasional flooding after heavy rain. Flood control protection is now in place on the western and eastern sides of Bound Brook; however, the main flood levee that will protect the borough from damaging floodwaters from the Raritan River is not expected to be completed until at least 2012. The flood levee is expected to provide protection from 150-year floods.

There were 3,615 households out of which 31.0% had children under the age of 18 living with them, 49.1% were married couples living together, 11.9% had a female householder with no husband present, and 31.9% were non-families. 23.1% of all households were made up of individuals and 9.2% had someone living alone who was 65 years of age or older. The average household size was 2.81 and the average family size was 3.21.

Bound Brook has become a in Somerset County, with many businesses in the downtown area, including restaurants and small markets, owned by Latinos.

Bound Brook is governed under the Borough form of New Jersey municipal government by a mayor and a six-member borough council, all elected at-large in partisan elections. The mayor is directly elected by the voters to a four-year term of office. Members of the borough council serve three-year terms of office on a staggered basis, with two seats coming up for election each year. ["2005 New Jersey Legislative District Data Book", , April 2005, p. 77.]

The serves students in Pre-Kindergarten through twelfth grade. Schools in the district (with 2005-06 enrollment data from the [ [http://nces.ed.gov/ccd/schoolsearch/school_list.asp?Search=1&DistrictID=3402100 Data for the Bound Brook School District] , . Accessed , .] ) are LaMonte School (Pre-K through 2nd grade; 378 students), Lafayette School (3-5; 378), Smalley School (6-8) and
(727). Students from South Bound Brook attend the district's high school as part of a .

The Bound Brook offers service on the . The station building on the north side of the tracks is now a restaurant; the other station building on the south side is now privately owned. A tunnel connects the south and north sides of the tracks. There are also tracks going through this station, used for freight trains going to Newark. The station is located at 350 E. Main Street, and was built in 1913.

NJ Transit bus service to the in on the 114 and 117 routes. Local service to Newark is available on the 65 and 66 routes. [ [http://www.njtransit.com/sf_tp_rc_somerset.shtml Somerset County Bus/Rail Connections] , . Accessed , .]

The lower downtown area of the city has been infamous for ing of the Raritan River. A major flood in 1896 caused major fires. [ [http://www.boundbrook.com/Content/167/6.aspx About Bound Brook] , accessed , .] In September 1999, many structures in Bound Brook near the commercial zone were damaged or destroyed by floods from the resulting from . The flooding from this hurricane reinvigorated a long-planned effort called the that would protect Bound Brook from up to a 150 year flooding event from the Raritan River and its tributaries the Middle and Green brooks that comprise the western and eastern boundaries of the town. The highest flooding level since 1800 in Bound Brook was reached during in September 1999 (42.13 feet, according to the [ [http://geography.rutgers.edu/department/scrapbook/projects/raritan_flood/studentprojects/mma/floodanalysis.html Bound Brook Flood Analysis] , accessed , .] ). The second highest recorded level was after the , when the Raritan River crested above 38 feet, at two inches above the level set during Tropical Storm Doria in 1971. Main Street was also flooded in October 1996. Bound Brook's downtown flooding has led to several out-of-control fires over its history, including the fires of 1881 and 1887 which led to the formation of the Bound Brook Fire Department. During Hurricane Floyd in 1999, a fire began in Otto Williams Harley Davidson on Main St. With the building cut off by flood water, the fire spread quickly to two other structures before being stopped by the efforts of the Bound Brook Fire Department, then under the command of Chief Richard S. Colombaroni. Utilizing Fire boats from the FDNY as well as extensive help from mutual aid companies, the fire was stopped before two other buildings on Main St. and others nearby on Mountain Avenue, could be affected. During the April 2007 Nor'easter, The BBFD stopped another fire from spreading through an area of close residential construction. Under the command of Chief James Knight, and again with the assistance of mutual aid companies including the Finderne Fire Department, fire loss was restricted to 3 residential buildings.