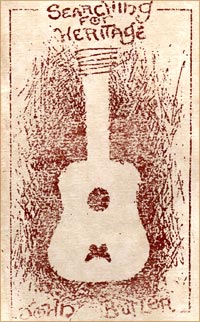 "Searching for Heritage" is a cassette tape that John Butler recorded and sold while he was busking on the street of Fremantle in 1996. It is a collection of instrumental songs, some of which ("Ocean" and "Valley") were re-recorded on the debut self-titled album "John Butler". Completely self funded, it sold three and a half thousand copies and enabled Butler to fund his first CD recording.

The tape is highly sought after by collectors and is very much unavailable other than from second hand dealers. No copies remain for sale and Butler has stressed that it won’t be re-released anytime in his foreseeable future.

All tracks written by John Butler.