Trench Railways represented adaptation of early 20th century technology to the problem of keeping supplied during the static phase of . The large concentrations of soldiers and at the front lines required delivery of enormous quantities of , and fortification construction materials where transportation facilities had been destroyed. Reconstruction of conventional roads and railways was too slow, and fixed facilities were attractive targets for enemy artillery. Trench railways linked the front with standard gauge railway facilities beyond the range of enemy artillery. Empty cars often carried litters returning wounded from the front.

Steam locomotives produced enough smoke to reveal their location to enemy artillery. Steam locomotives required fog or darkness to operate within visual range of the front. Daylight transport usually required animal power until internal combustion locomotives were developed. Large quantities of hay and grain were carried to the front while s remained an essential part of military logistics.

Captain Péchot of the French Artillery designed a 10-tonne articulated 0-4-4-0T locomotive. The French military had 62 Péchot-Bourdon type built between 1888 and 1914. built 280 more during the war.

The employed a 60-centimeter gauge supply system of gasoline-powered armored locomotives and underground electric locomotives pulling cars of design. Two Péchot-Bourdon locomotives were preserved in the technical museums of and .

manufactured portable track. Krauss designed a 0-6-0T Zwillinge intended to be operated in pairs with the cabs together. The Zwillinge offered performance through tight curves, but damage to one unit would not disable the second. One-hundred-eighty-two Zwillinge were manufactured from 1890 through 1903, and shortcomings were evaluated in and China's .

An 11-tonne 0-8-0T Brigadelok design with articulation of the front and rear axles was adopted as the new military standard in 1901. Approximately 250 were available by 1914, and over two thousand were produced during the war. A Brigadelok typically handled six loaded cars up a 2% grade.

Approximately 20% of the Brigadeloks saw postwar use. Government railways of (Yugoslavia), Macedonia, and made extensive use the military locomotives. Significant numbers were used in , , , , and while smaller numbers went overseas to , , , and . 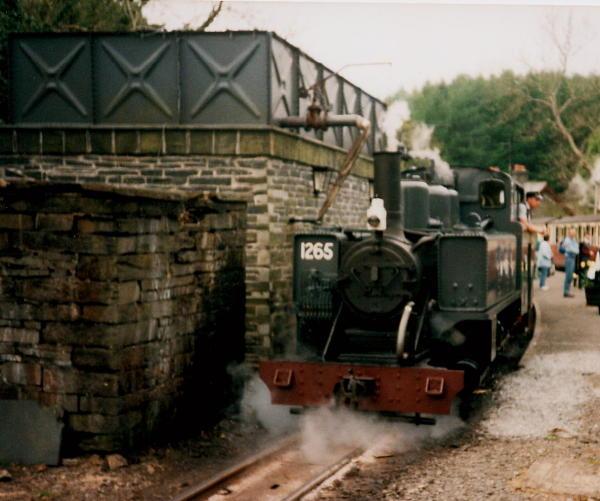 Britain selected a 4-6-0T design as their standard for the French rail gauge; but Hunslet's production of 75 locomotives was insufficient. produced 495 15-tonne 4-6-0T of a less satisfactory American design while and built 83 0-6-0T locomotives. One-hundred 15-tonne 2-6-2T of the American standard military design were later purchased from ALCO's Cooke Locomotive Works for British use.

produced 15-tonne 2-6-2T numbered 5001-5195. Number 5195 was sent to as a pattern for their production of the design, while another was sent to to test operation of their military railway car production. Two were lost at sea, and the remaining 191 saw service with the U.S. Army in France. Locomotives were initially painted grey with black smoke boxes. White lettering was applied to early production, but black lettering was used in France. Baldwin also built 5-tonne 26 kW and 7-tonne 37-kW 4-wheel gasoline mechanical locomotives for the U.S. Army. The lighter locomotives were numbered 8001-8063. The heavier locomotives were numbered 7001-7126 and operated at 2 meters per second.

The standard American military railway car was 170-centimeters wide and 7-meters long riding on two 4-wheel archbar bogies. 1,695 of these cars were built by , and . Most were flat cars, but some had gondola sides, others had roofs (either with open sides or like conventional s) and others carried shallow rectangular tanks with a capacity of ten-thousand liters of drinking water. The box cars and tank cars were regarded as top-heavy and prone to derailment; so most loads were carried on flat cars and gondolas. Approximately 1600 4-wheel side dump cars were produced in several versions for construction earth-moving.

built one-hundred 15-tonne 2-6-2T and built thirty more. Whitcomb built 74 7-tonne 4-wheel gasoline mechanical locomotives. None of the Davenport, Vulcan, and Whitman production saw overseas service, but some survived through on United States military bases including , , , , and an arsenal in .