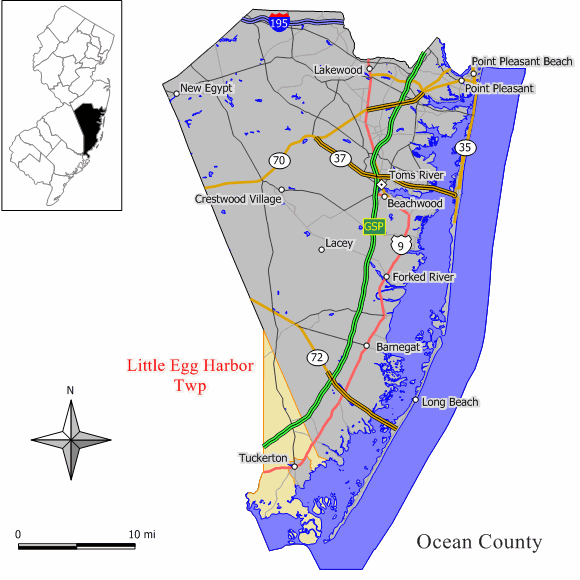 Little Egg Harbor Township is a Township in Ocean County, , . As of the , the township population was 15,945.

Mystic Island (2000 Census population of 8,694) is a and unincorporated area in the southern part of the township. The borough of Tuckerton is within the township but is politically independent. Little Egg Harbor and Tuckerton share the same ZIP code.

Originally part of Burlington County, Little Egg Harbor took its name from the portion of a bay called Egg Harbor (known today as ) by the Dutch sailors because of the eggs found in nearby gull nests. The first known account of the town was made by Captain Cornelius Jacobsen May in 1614. [ [http://oceancountylibrary.org/Branches/LEH/lehcomprofile.htm Little Egg Harbor Community Profile] , Ocean County Library. Accessed , .]

The first man to settle the township was Hanry Jacobs Falkinburg Sr. He arrived a little before 1698 and would trade with the local Native Americans, giving him farmland and plots of land known now as Wills Island and Osborn Island. Later, as Falkinburg could speak fluent Lenni Lenape, he acted as an interpreter between the Indians and settlers.

In October 1778, the took place as was wreaking havoc on Colonial shipping in the . and his newly raised forces were ordered to oppose his actions. Pulaski's Legion, along with three companies of light infantry, three troops of light horse, and one artillery detachment, came too late to be of great use against Ferguson's operations. But their arrival did stop Ferguson from raiding the iron works at Batsto, and stemmed their attacks on privateers at The Forks of the Mullica River.

They then set up camp on a farm. A deserter, Lt. Gustav Juliet, found Ferguson and told him of Pulaski's encampment; he mentioned that morale was fairly low, and security almost nonexistent, so that a surprise attack would be devastating. Ferguson promptly loaded 250 of his best men onto boats and rowed them, in the dark, some ten miles (16 km) to Osborne Island. He then marched them a further two miles (3 km) to the site of the infantry outpost, which comprised fifty men a short distance from the main encampment. At first light, Ferguson ordered the attack; only five of his quarry were taken alive. Pulaski eventually led his mounted troops up, causing Ferguson to retreat to his boats minus a few men that had fallen into the colonists' hands. A memorial on Radio Road commemorates the attack.

One of the first recorded ships of the township was a sloop belonging to Thomas Ridgway Sr. John Mathis Sr. also had a ship which his son, Daniel, sailed the West Indian routes. They made a profit from selling clams and oysters.

The 825 foot [http://www.lehsd.k12.nj.us/virtualcom/Giffordtown/Wireless/tuckerton_wireless.htm Tuckerton Wireless Tower] (coord|39.5585|N|74.3706|W|) was built in 1912 [ "Tuckerton Station Claimed by French" New York Times, Jan 16, 1915 ] by the German "Hochfrequenzmaschin Aktiengesellschaft Fuer Drahtlose Telegraphie" company (The High Frequency Machine Corporation for Wireless Telegraphy, often referred to as HOMAG) when the present-day Mystic Island was called Hickory Island. The [http://mcnally.cc/wgg/gsw10.jpgtower] was used to communicate with an identical radio telegraph station in Eilvese, Germany starting on 19 Jun 1914, less than two weeks before the [http://www.gwpda.org/1914/ferddead.html assassination of Archduke Ferdinand] . The [http://www.ettc.net/njarts/details.cfm?ID=808 station] continued to communicate with Eilvese [ "Goldschmidt Transatlantic Radio Station, John L Hogan Jr, Electrical World, Oct 31, 1914 ] until America entered on . It is rumored that it was used to send the message to order the attack by a German on the . After President Wilson's [http://www.gwpda.org/1914/wilsonneut.html Declaration of Neutrality] , the President [http://www.presidency.ucsb.edu/ws/index.php?pid=75378 ordered] the US Navy to take over the station on [http://www.gwpda.org/naval/usnrf.htm 9 Sep 1914] to assure the [http://earlyradiohistory.us/1963hw19.htm#19sec2 neutrality of messages] sent to and from the station; however, the station continued to be operated by German nationals employed by HOMAG and continued to communicate only with the [http://earlyradiohistory.us/1963hw19.htm#19sec3 Eilvese radio station] .

When America entered the war, all U.S. radio stations were seized and shut down by [http://www.presidency.ucsb.edu/ws/index.php?pid=75415 Executive Order] . The remaining German personnel at Tuckerton immediately became war prisoners and were replaced by U.S. Navy personnel. The Navy used the [http://mcnally.cc/tuckmain.htm Tuckerton Radio Station] for transatlantic communications while the naval radio stations in [http://earlyradiohistory.us/1963hw20.htm#20sec2 New Brunswick, NJ] and Sayville, NY were undergoing major transmitter and antenna upgrades. Tuckerton was used for fleet broadcasts after installations of 200 kilowatt transmitters at New Brunswick and Sayville were completed in June, 1918.

After the war, the [http://www.ettc.net/njarts/details.cfm?ID=808 Tuckerton Wireless Station] was included in German war reparations paid to America. Shortly afterwards, it was sold to which operated it until 1948 as a backup to their famous Radio Central facility in Rocky Point, . In 1921, RCA installed two massive s, which were removed in 1948. For transatlantic communications, The radio station operated under the s WCI and WGG. For coastal communications, after World War I, the station operated under the callsign WSC. The [http://www.njhm.com/images/tuckertontower.jpgconvert|820|ft|m|0|sing=on steel tower] , anchored by three large concrete blocks, was taken down on December 27, 1955. [ [http://www.oceancountylibrary.org/Branches/T/tcomprofile.htm Tuckerton Community Profile] , accessed , . "Just prior to World War I, the German government built the Tuckerton Wireless, a convert|680|ft|m|0 tall tower with the capability of communicating directly with Europe. The tower was operated by German nationals until the entrance of the United States into the war. Local folklore maintains that the message "Get the Lucy" was broadcast from the tower, which resulted in the famous sinking of the Lusitania. The tower was dismantled in 1955. "] The three huge anchor blocks still exist today, in a backyard on [http://www.stuofdoom.com/blocks.html North Ensign Drive] and in the middle of [http://www.saturation.org/saturationblog/archives/blocks2.jpgSouth Ensign Drive and Staysail Drive] . Many smaller anchor blocks providing foundations for [http://www.njhm.com/images/tuckertontower.jpgsmaller towers visible in this photo] , that supported the are still visible in the lagoons. Remains of the large tower can be seen in scraps at the [http://www.tuckertonlehhs.org/schoolhouse.php Giffordtown Museum] .

Cranberry Creek also helped the extension of Otis Bog Road, from U.S. Route 9, to Center Street. Holly Lake and Holly Lake Park are separate communities, Holly Lake Park is the original, and they both share ownership of the same freshwater lake, Holly Lake. The lake contains lots of sunnies and Northern River Otters. The lake drains out to the and . Another local river from that network is Willis Creek, running through and providing lagoons for the Atlantis Development.

Mystic Island is a master-planned community built in the 1960s with lagoon-front homes. Most of the homes have either been expanded on or torn down then replaced with larger homes, usually set on pilings. The Tuckerton Wireless tower was located here.

Little Egg Harbor Township was in the headlines after the , , when a fighter jet on a training mission from the 113th Wing of the District of Columbia , based at in , shot seven bullets into the Intermediate School's roof, and many others into the parking lot. The plane had been on a training mission at the [http://www.globalsecurity.org/military/facility/warren-grove-r.htm Warren Grove Gunnery Range] , a convert|2400|acre|km2|0|sing=on area about 3½ miles from the school. The coverage was featured on many popular network stations. The school was repaired during the New Jersey Teachers' Convention. Only a few custodians were in the school, and nobody was injured. [ [http://www.pressofatlanticcity.com/news/story/6895028p-6759388c.html Little Egg school shot by jet to get $519,000] , "", , .]

There were 6,179 households out of which 30.3% had children under the age of 18 living with them, 56.8% were married couples living together, 10.4% had a female householder with no husband present, and 28.1% were non-families. 22.5% of all households were made up of individuals and 10.7% had someone living alone who was 65 years of age or older. The average household size was 2.55 and the average family size was 2.98.

Students in public school for grades pre-K through 6 attend the schools of the . Schools in the district (with 2005-06 enrollment data from the . [ [http://nces.ed.gov/ccd/schoolsearch/school_list.asp?Search=1&DistrictID=3408700 Data for the Little Egg Harbor Township School District] , . Accessed , .] ) are [http://www.lehsd.k12.nj.us/gjmpage/gjmhome.htm George J. Mitchell Elementary School] for pre-K through second grade (820 students) and [http://www.lehsd.k12.nj.us/inter/lehinthome.htm Little Egg Harbor Township Intermediate School] for grades 3 to 6 (850 students).

Notable current and former residents of Little Egg harbor Township include:
*, has served in the since 2003, and has served on the Little Egg Harbor Township Committee, serving as the township's mayor from 2000 - 2003. [ [http://www.njleg.state.nj.us/members/Rumpf.asp Assemblyman Rumpf's Legislative Website] , . Accessed , .]