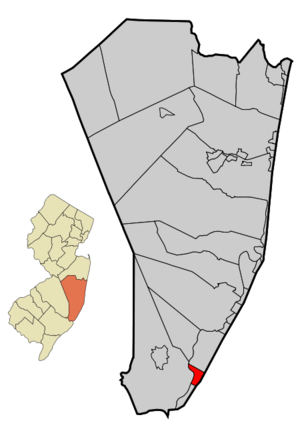 Beach Haven was incorporated as a Borough by an Act of the on , , from portions of Eagleswood Township, based on the results of a referendum held five days earlier.

Beach Haven is a late 19th century beach-front resort originally established in 1873 to house wealthy summer residents from Philadelphia. Although some of the major structures have been lost and the beachfront now contains modern motels, a large portion of the town retains its Victorian and Edwardian character. The Beach Haven Historic District listed in the New Jersey and the in the early 1980s, encompasses the most intact buildings at the core of the resort. [ [http://www.nationalregisterofhistoricplaces.com/nj/Ocean/state.html NEW JERSEY - Ocean County] , . Accessed , .]

Beach Haven is located on the southern part of .

Beach Haven is home to multiple attractions, including the only amusement park on the island: [http://www.fantasyislandpark.com Fantasy Island] , off-Broadway quality live musical theatre: [http://www.surflight.org Surflight Theatre] , cabaret-style sing-for-your dessert entertainment: [http://www.surflight.org/showplac.htm Showplace Ice Cream] , Bay Village Shopping Center, [http://www.lbi.net/nonprof/lbimusm.html Long Beach Island Museum] and many distinctive shops and restaurants. There is also miniature golf and a water park. Veteran's Bicentennial park, in the heart of Beach Haven, hosts many summer concerts, flea markets and parades, and an open park area for general recreation. As the island is only a few blocks wide, the beach and the bay are readily accessible from anywhere in Beach Haven. Pavilions can be found at Fifth and Pearl Streets. Beach badges are required and can be purchased at Borough Hall or the Centre Street badge booth.

There were 586 households out of which 18.3% had children under the age of 18 living with them, 47.4% were married couples living together, 8.7% had a female householder with no husband present, and 40.8% were non-families. 35.0% of all households were made up of individuals and 19.5% had someone living alone who was 65 years of age or older. The average household size was 2.17 and the average family size was 2.80.

Beach Haven has governed under the Walsh Act since 1946, by a three-member Board of Commissioners, one of whom is selected to serve as Mayor. Commissioners are elected in non-partisan elections to serve four-year concurrent terms, with all three currently serving commissioners terms ending in 2010. [ [http://www.njstatelib.org/NJ_Information/Digital_Collections/MFMG/MFMGCH4.PDF The Commission Form of Municipal Government] , p. 53. Accessed , .] The Mayor of Beach Haven is Thomas J. Stewart (who serves as ), and the other commissioners are Mike Battista () and Tony Deely (). [ [http://www.beachhaven-nj.gov/Mayors%20Monologue.htm The Mayor's Monologue] , Borough of Beach Haven. Accessed , .] [ [http://www.oceancountyclerk.com/elelectedofficials2007.pdf#page=2 2007 Elected Officials of Ocean County] , . p. 2. Accessed , .]

For grades 7 through 12, public school students attend the [http://www.srsd.net/middleschool Southern Regional Middle School] (grades 7 and 8) and (grades 9 - 12). These schools are part of the , which serves the five municipalities in the Long Beach Island Consolidated School District, along with students from Beach Haven and Stafford Township, along with the sending district of Ocean Township. [ [http://education.state.nj.us/rc/rc07/narrative/29/4950/29-4950-050.html Southern Regional High School 2007 Report Card Narrative] , . Accessed , . "Situated in Manahawkin, the Southern Regional High School District draws from the constituent municipalities of Long Beach Township, Beach Haven, Surf City, Ship Bottom, Barnegat Light, Harvey Cedars and Stafford Township, as well as the tuition sending municipality of Ocean Township (Waretown)."] The current district population is approximately 4,000 students. Both schools are in Manahawkin. [ [http://www.beachhaven-nj.gov/Board%20of%20Education.htm Beach Haven Board of Education] , Borough of Beach Haven. Accessed , .]

Notable current and former residents of Beach Haven include:
* (1905-1990), who played for four teams from 1929 to 1948. [ [http://www.baseballhistorian.com/html/american_heroes.cfm?page=114 1945 World Champion Detroit Tigers] , Baseball Historian. Accessed , . "Doc Cramer, Centerfielder - a 20-year major league veteran, he was one of the AL's top fielders. Born in Beach Haven, New Jersey, Roger Doc Cramer broke into the big-leagues back in 1929, and was 40-years old when the '45 Series rolled in."]