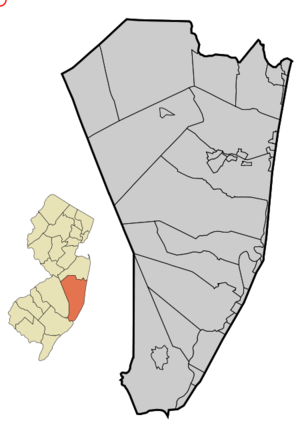 Barnegat Township is a Township in Ocean County, , . As of the the population was 15,270.

What is now Barnegat Township was incorporated as Union Township on , , from portions of both Dover Township (now Toms River Township) and Stafford Township, while the area was still part of Monmouth County. It became part of the newly-formed Ocean County on , . Portions of the township were taken to form Lacey Township (, ), Ocean Township (, ), Harvey Cedars (, ) and Long Beach Township (, ).

Barnegat gets its name from nearby and . The inlet was originally "Barendegat," or "Inlet of the Breakers," and was named by Dutch settlers in 1609 for the waterway's turbulent channel. [Lloyd, John Bailey. "Eighteen Miles of History on Long Beach Island." p. 42. 1994 Down The Shore Publishing and The SandPaper, Inc.]

There were 5,493 households out of which 35.3% had children under the age of 18 living with them, 63.0% were married couples living together, 9.7% had a female householder with no husband present, and 23.7% were non-families. 20.2% of all households were made up of individuals and 12.0% had someone living alone who was 65 years of age or older. The average household size was 2.76 and the average family size was 3.19.

Barnegat Township is governed under the Township form of government with a five-member Township Committee. The Township Committee is elected directly by the voters in partisan elections to serve three-year terms of office on a staggered basis, with one or two seats coming up for election each year. ["2005 New Jersey Legislative District Data Book", , April 2005, p. 49.] At an annual reorganization meeting, the Township Committee selects one of its members to serve as Mayor and another as Deputy Mayor.

The majority of the Barnegat Township Committee ran as Republicans, with the exception of Len Morano. [ Prince, Brian. "GOP majority intact in Barnegat", p. 1B, "", , .] Morano is a former member of a loosely-organized group called the Wawa Boys. The Wawa boys used to stand outside a local Wawa convenience store and talk politics. They have been both credited with being a grass-roots movement with an impact on local government and villainized for being a group of "nit-picking blowhards, part of why town politics are so venomous." [Vandiver, John. "Where the "boys" are". A1, "", , .]

In addition to easy access to and from the , Barnegat is a hub of major state and county highways. Route 72, which runs east to west, provides access to Burlington County and . County Route 539, which intersects Route 72, links the Township with Trenton. U.S. Route 9 and the Garden State Parkway split the Township east-west.