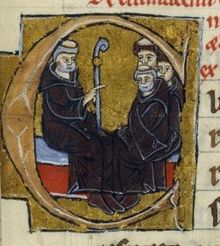 Peter the Venerable, with other monks, 13th century illuminated manuscript.

Peter the Venerable (about 1092 – December 25, 1156 in Cluny, France), also known as Peter of Montboissier, abbot of the Benedictine abbey of Cluny, born to Blessed Raingarde in Auvergne, France. He has been honored as a saint but has never been formally canonized.

Peter was "Dedicated to God" at birth and given to the monastery at Sauxillanges of the Congregation of Cluny. He took his vows there at age seventeen, swiftly rising in esteem and becoming professor and prior of the monastery of Vézelay at only twenty years of age. Later he went to the monastery at Domene. He was so successful in the fulfillment of his duties at Vézelay and Domene that by the age of thirty he was elected general of the order. Peter was a tireless advocate of reform within his order, which was in dire need of reconstruction after the deposing of the previous abbot, Pontius, by the pope. The Congregation of Cluny was also under attack by other orders and prominent monks and theologians, including St. Bernard of Clairvaux, a Cistercian monk. Successfully defending against these attacks, and completely reforming his order, Peter earned the appellation of "venerable."

Peter became a popular international figure and an associate of many national and religious leaders of his day. He attended many of the important religious councils of his generation, including the Council of Pisa in 1134, where he helped to avert a potential schism in the Church by supporting the cause of Pope Innocent II, and the Council of Reims in 1147. In addition, he defended French theologian Peter Abelard after the latter’s rationalistic Trinitarian interpretation had been condemned by the Council of Sens. He granted Abelard hospitality at Cluny and worked to mitigate the sentence of the council, eventually reconciling Abelard with his principal condemner, St. Bernard of Clairvaux. After Abelard's death, Peter granted him absolution from his sins, at the personal request of Heloise.

Peter is well known for collecting sources on and writing about Islam (see below) and also as the author of vast amounts of correspondence, reflecting his almost encyclopedic knowledge of theological questions. His writings are counted as some of the most important documents of the 12th century. He took a long sabbatical journey to Spain to study with Islamic scholars of all ranks and published the first Latin edition of the Koran. His Talmudic contributions are tenuous and still under scrutiny. Peter's true brilliance came to light between 1138-1142, especially after his translation of the Koran became required reading to the entire Benedictine world and for all preachers of the crusades. Peter corresponded with Bishop Henri de Blois of Winchester and Glastonbury who became one of his closest friends and confidants. Peter was well known for his ability to win debates. The internecine truce between Peter and Bernard of Clairvaux must be seen as superficial in light of recent scholarship detailing the repressivness of Bernard's Cistercians toward the Cluniacs. [1]

Despite his active life and important role in European history, Peter's greatest achievement is his contribution to the reappraisal of the Church’s relations with the religion of Islam. A proponent of studying Islam based upon its own sources, he commissioned a comprehensive translation of Islamic source material, and in 1142 he traveled to Spain where he met his translators. One scholar has described this as a “momentous event in the intellectual history of Europe.”[2]

The Arabic manuscripts which Peter had translated may have been obtained in Toledo, which was an important centre for translation from the Arabic. However, Peter appears to have met his team of translators further north, possibly in La Rioja, where he is known to have visited the Cluniac monastery of Santa María la Real of Nájera. The project translated a number of texts relating to Islam (known collectively as the "corpus toletanum"). They include the Apology of al-Kindi; and most importantly the first-ever translation into Latin of the Arabic Qur'an (the "Lex Mahumet pseudoprophete") for which Robert of Ketton was the main translator. Peter of Toledo is credited for planning and annotating the collection, and Peter of Poitiers (Peter the Venerable's secretary) helped to polish the final Latin version. The team also included Robert of Ketton's friend Herman of Carinthia and a Muslim called Mohammed. The translation was completed in either June or July 1143, in what has been described as “a landmark in Islamic Studies. With this translation, the West had for the first time an instrument for the serious study of Islam.”[3]

Peter used the newly translated material in his own writings on Islam, of which the most important are the Summa totius heresis Saracenorum (The Summary of the Entire Heresy of the Saracens) and the Liber contra sectam sive heresim Saracenorum (The Refutation of the Sect or Heresy of the Saracens). In these works Peter portrays Islam as a Christian heresy that approaches paganism, and he explains to St. Bernard that his goal is "ut morem illum patrum sequerer, quo nullam unquam suorum temporum vel levissimam (ut sic dicam) haeresim silendo praeterirent, quin ei totis fidei viribus resisterent et scriptis ac disputationibus esse detestandam ac damnabilem demonstrarent."[4] That is, "that I may follow the custom of those Fathers, who passed over no heresy in silence ever, even the lightest (as I will thus call it), but rather resisted it with all the strength of their faith, and showed it, through writings and arguments, to be detestable and damnable."

While his interpretation of Islam was basically negative, it did manage in “setting out a more reasoned approach to Islam…through using its own sources rather than those produced by the hyperactive imagination of some earlier Western Christian writers.”[5] Although this alternative approach was not widely accepted or emulated by other Christian scholars of the Middle Ages, it did achieve some influence among a limited number of Church figures, including Roger Bacon.

At his weekly general audience in Saint Peter's Square on 14 October 2009, Pope Benedict XVI used Peter as an example of compassion and understanding, citing Peter's governance of Cluny, diplomacy, and study of Islam[6].