The now defunct Missouri River Otters was a minor pro team in the United Hockey League from 1999 to 2006. They were located in St. Charles, Missouri, a suburb of St. Louis. Mike Shanahan Jr. was the owner and president when the team ceased operations. Frank Buonomo served as General Manager. They played all of their home games at the St. Charles Family Arena which opened in October 1999.

After the NHL lockout in 2004-2005, NHL defenseman Barret Jackman decided to stay in St. Louis and play hockey for the River Otters during the lockout, along with center Ryan Johnson, defenseman Bryce Salvador and right winger Jamal Mayers

Barret Jackman of the St. Louis Blues wore jersey #55 with the River Otters

The River Otters also boasted veteran NHL'ers like Jim Montgomery, Dennis Vial, and Lonnie Loach, who wore #33 and is the only person to have his number retired with the Missouri River Otters.

In late April 2006, Mike Shanahan Jr. decided to fold the team due to lack of attendance, issues with the lease at the Family Arena and a steep workmans comp bill. The staff was then let go as the announcement was made that the team would not play in the up coming 2006-07 United Hockey League season. While leaving open the possibility of a sale, owner Mike Shanahan Jr. said that the competition for the sports dollar in the greater St. Louis area meant that the team would likely fold instead of being sold [1]. There are now rumors that the Otters might be playing again next season, but not necessarily in the United Hockey League. There is interest in joining the East Coast Hockey League if Missouri reforms. Along with the league change possibilities, a name change may be in the works as well. 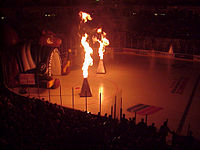 The River Otters players portal to the ice (1999) 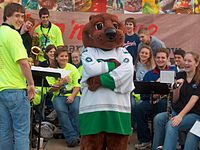 Oscar the Otter was named the team mascot before the inaugural opener on October 23, 1999 which the Otters won 6 to 2 against the Asheville Smoke

Oscar was well known for his craziness on the ice during home games. He loved to make everyone in the arena beg for T-Shirts during intermissions as well as sign autographs and take rides on the Zamboni.

He was also very active in the community during the 2005-2006 season, He made appearances at Ponderosa Steakhouse in St. Peters on a bi-weekly basis as well as visited local elementary schools and appeared on several TV segments including Tim Ezell's Morning Show during the Guns and Hoses Tournament at The Family Arena.