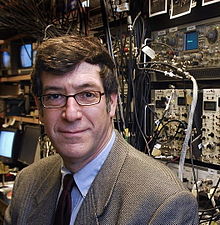 Mark George Raizen is a physicist who conducts experiments on quantum optics and atom optics.

Raizen was born in New York City where generations of his family resided since the 1840s. While he comes from a long line of medical doctors, dating back to the Civil War, Raizen's life took a different path. In his childhood, Raizen was influenced by his uncle, Dr. Robert F. Goldberger, former provost of Columbia University and deputy director for science at the NIH, to pursue a scientific career.

Like his mother, aunt, and uncle, Raizen attended The Walden School on the Upper West Side, until his family moved to Israel. He graduated from De Shalit High School and received his undergraduate degree in mathematics from Tel Aviv University in 1980. He continued his graduate education at the University of Texas at Austin, under the guidance of Steven Weinberg (Nobel Prize in Physics, 1979) and Jeff Kimble (California Institute of Technology).

Raizen completed his Ph.D. in 1989. From 1989 to 1991, Raizen was a National Research Council (NRC) post-doc at the Time and Frequency Division of the National Institute of Standards and Technology, working with David Wineland and James Bergquist.

In 1991, Raizen returned to Austin and The University of Texas where he became an assistant professor of physics. He was promoted to associate professor in 1996 and full professor in 2000. Raizen holds the Sid W. Richardson Foundation Regents Chair, one of only four such chairs in the physics department.

Raizen started his scientific career in theoretical particle physics in 1984 with Steven Weinberg, his mentor. In 1985, Raizen moved into experimental physics where he began a close association with Jeff Kimble. In his graduate work, Raizen was instrumental in one of the first experiments that measured squeezed states of light and also observed, for the first time, the Vacuum Rabi splitting in the optical domain.

While at NIST, Raizen developed the first linear ion trap which has become the basis for quantum information with trapped ions.

At the University of Texas, Austin, the research program in the Raizen Group uses laser cooling and trapping of neutral atoms to study many fundamental problems. One of the most important results was the first direct observation of the quantum suppression of chaos.

In other experiments, Raizen and his group investigated quantum transport of atoms in an accelerating optical lattice. They studied the loss mechanism during the acceleration and determined that it is due to quantum tunneling. Surprisingly, for short times they found a deviation from the exponential decay law in the survival probability. This is a manifestation of a basic quantum effect predicted over forty years ago by Leonid Khalfin but not observed until now. This short-time deviation from exponential decay was then used to suppress or enhance the decay rate, effects known as the Quantum Zeno effect or Anti-Zeno effect.

In recent years the focus of the experimental research shifted towards many-body physics. Towards this goal, Raizen and his group built two experiments with Bose-Einstein Condensate in rubidium and sodium. They developed a unique system for the study and control of quantum statistics of atoms and quantum entanglement. The system includes a condensate in an optical box trap together with single atom detection.

Raizen pioneered a totally new approach to producing ultra-cold atoms by coherent slowing of supersonic beams. Using an atomic paddle, a slow monochromatic beam of ground state helium was produced. In a different approach, pulsed magnetic fields were used to stop paramagnetic atoms and molecules. To further cool these particles, Raizen and his collaborators introduced the concept of a one-way barrier, or one-way wall, which is used to accumulate atoms or molecules in an optical tweezer. This method was realized experimentally by the Raizen Group in December, 2007. This cooling method is an exact physical realization of informational cooling, originally proposed by Leo Szilard in 1929. This proposal used the concept of information entropy to resolve the paradox of Maxwell's Demon. Together, these methods enable the trapping and cooling of ultra-cold atoms that span most of the periodic table and many molecules.

In 2009, Raizen and his group built an experiment to study Brownian motion of a bead of glass held in optical tweezers in air. In 1907, Albert Einstein published a paper in which he considered the instantaneous velocity of Brownian motion, and showed that it could be used to test the Equipartition Theorem, one of the basic tenets of statistical mechanics. In this paper, Einstein concluded that the instantaneous velocity would be impossible to measure in practice due to the very rapid randomization of the motion. In the spring of 2010, the Raizen Group measured the instantaneous velocity of a Brownian particle, over 100 years since the original prediction by Einstein. The velocity data was used to verify the Maxwell-Boltzmann velocity distribution, and the equipartition theorem for a Brownian particle.

In January, 2010, Raizen introduced a new field which he pioneered and named Atomoscience. This is the science of building complexity from the bottom up, enabled by the general methods of controlling atoms in gas phase. Two examples of applications in Atomoscience are efficient isotope separation for medicine and basic research, and magnetic focusing of supersonic beams to create nanoscale structures.

Raizen is married and resides in Austin and San Antonio, Texas with his numerous rescue dogs and cats. He is an advocate for historical preservation and animal rights.