The Demolished Man, by Alfred Bester, is a science fiction novel that was the first Hugo Award winner in 1953. The story was first serialized in three parts, beginning with the January 1952 issue of Galaxy Science Fiction, followed by publication of the novel in 1953. The novel is dedicated to Galaxy's editor, H. L. Gold, who made suggestions during its writing. Bester's title was Demolition!, but Gold talked him out of it.

The Demolished Man is an American science fiction police procedural novel set in a future where telepathy is common, although much of its effectiveness is derived from one individual having greater telepathic skill than another. Written 30 years before the 1980s cyberpunk boom, the novel anticipates that sub-genre with its mix of plot elements such as powerful corporations, high-tech weaponry and the interplay between varying classes of society. 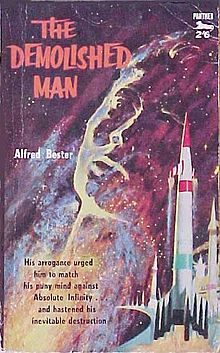 In the 24th Century, telepaths—"Espers" (short for Extrasensory perception), colloquially known as "peepers"—are completely integrated into all levels of society. Espers are classed according to their abilities: Class 3 Espers, the most common, can detect only conscious thoughts at the time they are formed and are often employed as secretaries or administrators; Class 2 Espers can dig more deeply, to the pre-conscious level, detecting subliminal patterns, epiphanies and tenuous associations, and they are employed in the professional middle class—lawyers, managers, psychologists, etc. Class 1 Espers can detect all of the foregoing plus sub-conscious primitive urges, and they occupy only the highest levels of power in fields such as the police, government, and medicine (such as psychiatry). All Espers can telepathically communicate amongst themselves, and the more powerful Espers can overwhelm their juniors. Telepathic ability is innate and heritable but can remain latent and undetected in untrained persons. Once recognized, however, natural aptitude can be developed through instruction and exercise. There is a guild to improve Espers' telepathic skills, to set and enforce ethical conduct guidelines, and to increase the Esper population through intermarriage. Some telepaths object to the Esper Guild's authoritarian control, however, and remain outside of it.

Ben Reich is the impetuous young owner of Monarch Enterprises, a commercial cartel that the Reich family has possessed for generations. Monarch Enterprises is in danger of bankruptcy, because of its chief rival, the D'Courtney Cartel, headed by the older Craye D'Courtney. Reich suffers recurring nightmares in which a "Man with No Face" persecutes him.

Reich contacts D'Courtney and proposes a merger of their concerns, but Reich's damaged psychological state causes him to misread D'Courtney's positive response as a refusal.[1] Frustrated and desperate, Reich determines to kill Craye D'Courtney. The presence of peepers has prevented the commission of murder for more than 70 years, so Reich devises an elaborate plan to ensure his freedom. If caught, Reich will certainly face "Demolition", a terrible punishment described only at story's end.

Reich hires an Esper to "run interference" for him—hiding his murderous thoughts from any peepers present at the scene of the planned crime. Reich has many Class 2 and Class 3 Espers working for him, but for this task he must hire a top Class 1 Esper. Reich bribes Dr. Augustus ("Gus") Tate, a prominent peeper psychiatrist, to be his mental bodyguard during the murder. Tate helps Reich, stealing information about D'Courtney's whereabouts by peeping an unknowing colleague.

To further conceal his intentions, Reich visits a songwriter who teaches him a deceptively simple jingle: "Eight sir, seven sir, six sir, five sir, four sir, three sir, two sir, one. 'Tenser,' said the Tensor, 'Tenser,' said the Tensor. 'Tension, apprehension, and dissension have begun.'" that proves to be an earworm, so persistent and involving that it blocks most Espers from properly peeping into Reich's mind. Reich secures a small flash grenade which can disrupt a victim's perception of time by destroying the eyes' rhodopsin, and an antique (20th-century) handgun, a rare object in a largely non-violent society. Reich is also advised how to replace the bullet in the handgun's ammunition with a gelatin capsule filled with water, in order to eliminate ballistics evidence.

Influencing a socialite into playing a game of Sardines at a party, Reich executes his plan during the game, but at the moment he shoots D'Courtney, D'Courtney's young daughter, Barbara, witnesses the murder and runs away. She is later found, suffering severe psychological shock that renders her catatonic and mute.

Police Prefect Lincoln Powell is a Class 1 Esper, a highly talented man expected to become the next president of the Esper Guild. Powell discovers Reich through some cleverly disguised peeping. However, Reich's Esper attorney is present at that encounter, noting that telepathically-gathered evidence is legally inadmissible in court. This obliges Powell to assemble the murder case with traditional police procedures and to establish motive, opportunity, and method.

Both sides center on finding and questioning (or, in Reich's case, silencing) Barbara D'Courtney. Although Reich finds her first, he is unable to kill her before she is rescued by Powell. Powell loses Reich, however, for a while. Powell's pursuit traverses the Solar System, as Reich escapes the police and a series of mysterious assassination attempts. Others are attacked also: during Powell's attempt to interrogate the Esper pawnbroker from whom Reich bought the gun, an unknown person attacks the pawnshop with a "harmonic gun" which kills by resonant sonic vibration. Reich tries but fails to murder Hassop, his chief of communications (to try to prevent him from assisting the police with his knowledge of the corporate codes), and Powell succeeds in abducting Hassop.

Powell has already established opportunity, and eventually method through discovery of a tiny fragment of gelatin in the body. However, just as Powell believes that he has wrapped the case up entirely, the interrogation of Hassop yields disturbing results—D'Courtney had accepted the merger proposal. That dashes Powell's case; as he remarks, no court in the Solar System would believe Reich murdered D'Courtney when D'Courtney was needed alive for the merger (which would save Reich and give him all the power and wealth he dreamed of) to succeed.

Reich's tortured mental state is unknown to Reich himself, and so Powell does not suspect that the motive for the murder was something other than financial. Powell recognizes that the forces behind Reich's crime are greater than anticipated. He asks the help of every Esper in attempting to arrest Reich, channeling their collective mental energy through Powell in the dangerous telepathic procedure called the "Mass Cathexis Measure"; Powell narrowly succeeds.

Reich is revealed to be the illegitimate son of Craye D'Courtney—Reich's hatred of him was probably because of his latent, telepathic knowledge of that fact. Reich's knowledge isn't explicitly stated, but Barbara, whom Powell discovers to be Reich's half-sister, is herself revealed to be a peeper. The assassination attempts on Reich were carried out by Reich himself, as a result of his disturbed state. Once arrested and convicted, Reich is sentenced to the dreaded Demolition—the stripping away of his memories and the upper layers of his personality, emptying his mind for re-education. This 24th-century society uses psychological demolition because it recognizes the social value of strong personalities able to successfully defy the law, seeking the salvaging of positive traits while ridding the person of the evil consciousness of the criminal.

Reviewer Groff Conklin characterized The Demolished Man as "a magnificent novel. . . as fascinating a study of character as I have ever read."[2] Boucher and McComas praised the novel as "a taut, surrealistic melodrama [and] a masterful compounding of science and detective fiction," singling out Bester's depiction of a "ruthless and money-mad [society] that is dominated and being subtly reshaped by telepaths" as particularly accomplished.[3] Imagination reviewer Mark Reinsberg received the novel favorably, citing its "brilliant depictions of future civilization and 24th century social life."[4] In his "Books" column for F&SF, Damon Knight selected Bester's novel as one of the 10 best sf books of the 1950's.[5]

The Demolished Man won the 1953 Hugo Award for Best Novel and placed second for the year's International Fantasy Award for fiction.[6]

Note on typography: Bester decided to play with typographic symbols when constructing various characters' names. This gave Wyg& for Wygand; @kins for Atkins; and ¼maine for Quartermaine. He initially used $$son for Jackson, using the slang term "jack" for "money" (represented by the dollar signs). He decided that the pun would be too obscure, though, and changed it to normal text.

Jo Walton has said that Demolished is shaped by Freudian psychology, comparing it to The Last Battle's relation to Christianity, and emphasizing that the resolution of the plot only makes sense in a Freudian context: Reich's hatred of D'Courtney is motivated by oedipal feelings.[8]