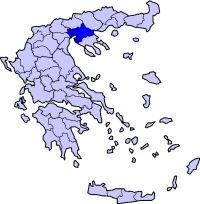 Thessaloniki ( _el. Θεσσαλονίκη) is a "" () in , containing , Lagana and the northern portion of the Chalcidicean peninsula. The prefecture is the second in Greece in population and the largest in Macedonia as well as northern Greece.

The rainfall of , (see ) hampered the eastern portion of the prefecture, Apollonia, , , Stavros, and were affected; the streams overflowed with mud and about 300 houses were flooded and damaged. Several people were stranded that one helicopter helped several victims trapped in the raging floodwaters. The valley area was heavily flooded seeing much of the crops damaged with some not being affected. Trees were sawn over the flooded plain. Three bridges were destroyed including the old section of the paralyzing traffic between Thessaloniki and and the other eroded a lane of the local road. The superhighway is north of the affected area and was re-opened. One of the causes of the flooding is the garbage not being cleaned out from its streams, the other was of poor architecture.

Its climate includes hot Mediterranean summers and cool to mild winters in low lying areas and its plains. Winter weather is very common in areas 500 m above sea level and into the mountains.

The area is connected by the following roads and highways.

Several superhighways and highways were added including the GR-1 and the new link with Thessaloniki and the superhighway in 1973, the and the Diagonal Road (GR-67, partly GR-18) and the partial section of the GR-65 in the 1970s and the 1980s and lately the superhighway between 1997 and 2005 and currently, the GR-12 will be converted to a superhighway standard in the late-2000s and the early-2010s.

Most of the stations are in the city (see ). Here are list of stations outside the city: