Clive Barker's Undying is a horror-themed first-person shooter video game based on the Unreal Tournament game engine. It was the last game developed by DreamWorks Interactive before becoming EA Los Angeles, and released in 2001 by Electronic Arts. Noted horror author Clive Barker was consulted in shaping the game's plot and background story and also provided the voice of Ambrose, a character in the game.[1]

Undying follows the adventures of 1920s Irish paranormal adventurer Patrick Galloway as he investigates the mysterious occult happenings at the estate of his friend Jeremiah Covenant.

The game begins in 1923, after World War I veteran Patrick Galloway receives an urgent letter from his friend Jeremiah Covenant. Covenant, well aware of Galloway's reputation for dealing with occult matters, is in failing health and raves about a curse that has destroyed his entire family. Galloway travels to the Covenant estate on the coast of Ireland to visit his friend, who relates an outlandish tale of supernatural terrors.

Jeremiah Covenant is one of five children, along with his siblings Ambrose, Lizbeth, and twins Aaron and Bethany. As children, the Covenants found a strange occult book in their father's library and performed a ritual found within at an ancient set of standing stones located on an island on their family's extensive estate. This seemingly childish game however, brought the wrath of evil forces upon the family. After reaching adulthood, the Covenants fell one by one into madness and then death, eventually leaving Jeremiah as the only survivor. The power of the curse, however, has reanimated his fallen brothers and sisters as monsters of pure evil; they have been haunting Jeremiah and he fears that he will soon follow where they have gone.

Galloway decides to honor his friend's wishes by trying to stop whatever was set in motion long ago at the ancient stones where the ritual was performed. Through the Covenants' journals and Galloway's own memories, the player learns more about the nature of the curse and the creature behind it: The Undying King, a powerful demonic presence threatening to destroy the reality we inhabit.

While attempting to prevent the Undying King from entering our world, Patrick must face off against the four undead Covenant siblings as well as Otto Keisinger, an evil rival who simply wants to gain power from the demonic forces.

The gameplay of Undying in general follows the precepts of the first-person shooter genre. The game simulates the main character's (Patrick Galloway's) point of view for the player, who utilizes a variety of weapons to defeat enemies within the game while making his or her way through a series of levels. As with most FPSs, Galloway has a certain amount of health, represented by a cross symbol and corresponding number at the bottom center-left of the screen. Each time the player is hurt by an enemy the health number is continually reduced until it reaches zero, at which point Galloway dies - an event which is usually marked by a third-person cut scene which shows his gruesome final moments. To prevent this, health can be replenished when low using health packs. Patrick's maximum health can also be permanently increased at certain points during the game.

Another aspect of the gameplay of Undying - and one which makes it somewhat similar in terms of ambience to traditional computer role-playing games - is that along with its set of offensive weapons, the player is able to utilize a wide range of magical spells. Spells consume a certain amount of Galloway's magical energy, or "Mana", which is represented by a flask icon and corresponding number on the bottom center-right of the screen. This energy slowly regenerates itself over time. Magical tatto pickups called "Arcane Whorls" permanently increase mana regeneration rate, while amulets called "Mana Wells" increase maximum mana by 10 up to 200. Once the player acquires a spell, it may be boosted in power each time the gamer finds an "Amplifier Stone", which are purple glowing crystals scattered throughout levels of the game. The player can simultaneously wield weapons in his left hand and cast magical spells with his right; the power of both the weapons and the spells increase accordingly as the game progresses.

Also, as is common with first-person shooters, combat is interspersed with simple puzzle-solving elements which usually involve overcoming an obstacle (such as a locked door) which impedes the player's progress through the game. Along with the usual "find the key" solution, the player is also often required to engage in conversation with non-player characters, or utilize a certain spell (usually the "Scrye" spell) in order to find out how to proceed.

The weapons in Undying are quite varied, ranging from standard first-person shooter fare to the supernatural. The more conventional weaponry include such standbys as a revolver, double-barreled shotgun, and Molotov cocktails. Along with these, the player is also given access to a number of more fantastic weapons, such as Phoenix eggs (which release explosive missile-like birds), the powerful demonic melee weapon called the "Scythe of the Celt", and the dragon-like "Tibetan War Cannon".

Notably, most weapons feature both primary and secondary firing settings (e.g. the secondary fire of the speargun is a zoomed mode similar to a sniper rifle). Some weapons also feature more than one kind of ammunition, such as the revolver, which is able to use both standard lead cartridges, as well as silver bullets for added damage. 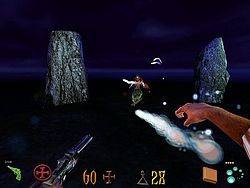 Galloway casts the Ectoplasm spell at an enemy while wielding his revolver.

Along with its many weapons, Undying also features a number of spells, both offensive and defensive, useful for defeating in-game enemies. These include ranged attack spells such as "Ectoplasm" and "Skull Storm", the latter of which unleashes a number of burning skulls at an enemy. Non-combat magic abilities include such powers as "Haste", which greatly increases player speed, "Shield" which envelops the player in a protective translucent screen, and "Scrye", a clairvoyant ability which enables Galloway to psychically see past events and other visions.

All spells can be upgraded throughout the game using amplifier crystals found throughout most levels. Spells are also boosted by one level when the player wields the Gel'ziabar Stone while casting.

Undying lacks any form of multiplayer, including cooperative play or online play. The game was originally planned to ship with a multiplayer aspect, but given time constraints it was later to be relegated to a post-release patch.[citation needed] With the poor sales performance of Undying, however, even this belated implementation was never realized.

Originally, the protagonist of the game was to be "Count Magnus Wolfram", a tattooed man with superhuman strength and supernatural abilities. Barker himself rejected this idea, noting that the more normal, down-to-earth Patrick Galloway would be easier to relate to for the average gamer. Wolfram's character model plays a small part in the finished product, however. He is the Trsanti shaman who attacks a younger Galloway with the Gel'ziabar Stone in the opening cutscene flashback.[3]

Clive Barker's Undying was in general very well received by critics, with it receiving an average of 85 on Metacritic.[4] The game won GameSpot's "Best game that no one played" award.[5]

Undying was critically well-received, but sold poorly with sales so low that announced plans for a multiplayer patch were abandoned. Console versions of the game were also cancelled, and EA and Brady Bell reportedly shelved the idea of a sequel. [6]