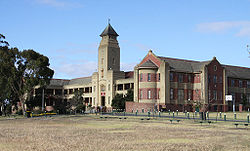 Three campuses are located in suburban Geelong: the Senior Campus at Waurn Ponds (Year 10-12), the Middle School in Highton (Year 5-9), and the Junior School in Belmont (Prep - Year 4), while the Bellarine Campus in located in Drysdale (Prep- Year 9). There are also two other specialist campuses: "Back Creek" in Scotsburn (near Ballarat) is a dairy farm attended by Year 9 students,[2] and a specialised Arts centre off campus in Waurn Ponds a short distance from the Senior School, where VCE Arts students have their classes. The future Surf Coast campus will be located in the coastal town of Torquay and is the process of planning.

Christian College students are from a number of different areas in Geelong, these areas include Torquay, Drysdale, Anglesea, Ocean Grove, Queenscliff and Winchelsea as well as a majority from Geelong itself.[3] Notable people to have gone to Christian College Geelong include current AFL players Gary Ablett, Jr. and Nathan Ablett.[citation needed]

The college opened in 1980, in the suburb of Highton and has grown from its original 40 students to over 1900 students in 2007. The Middle School is housed in the former building of St. Augustine's Orphanage, while the Junior School uses the former Glastonbury Orphanage. The Senior Campus is located at a former campus of the Geelong Grammar School, which was purchased by Christian College in 1999 and opened to students in 2000. The Bellarine Campus is the former council offices for the Rural City of Bellarine which was amalgamated into the City of Greater Geelong in 1993, the school bought the property in 1995 and started classes in 1996 for students on the Bellarine Peninsula, which removed the burden of travelling to Geelong.

There are four houses at Christian College into which students are split. They are Penman, Flynn, Taylor and Burrows. Burrows (previously known as Hume) is named after Eva Burrows, Taylor after Hudson Taylor, Penman (previously known as Cunningham) after David John Penman and Flynn after Reverend John Flynn. Flynn are the current holders of the school D.C. Riddle Cup (awarded at the Senior Campus). This cup is awarded to the house that earns the most points over the four major carnivals of Athletics, Cross Country, Swimming and House Music. There are also various lunch time activities that also earn points towards the D.C. Riddle Cup. These lunch time activities include Cricket(Girls and Boys), Basketball (Boys), Netball (Girls), AFL (mixed with modified rules), Volleyball (mixed) and Bocce (mixed) carpet bowls (mixed). The colours of the houses are Red (Penman), Green (Taylor), Blue (Flynn) and Yellow (Burrows). Each house also has a mascot in the form of an animal they are: Penman Panthers, Burrows Bears, Flynn Falcons and Taylor Tigers.

Christian College has a music program that teaches strings, wind, percussion, piano, brass and bass. There are many music teachers at Christian College and the school also has bands, choirs, orchestras, and symphonies that compete every year. In the Melbourne School Bands Festival 2008, Christian College Geelong received a Gold Award in the Advanced Concert Band Section. Christian College also had a tour to Sydney where some of the Christian College Bands performed at the Sydney Opera House. The music department (in conjunction with the drama department) also stages a bi-annual school musical, the most recent being Seussical the Musical in May 2011. Recently they also travelled to Hawaii to partake in the Annual Pacific Basin Music Festival which they received a gold award in.