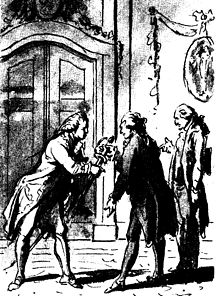 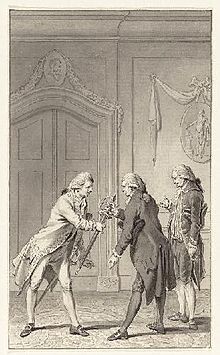 Mattheus Lestevenon, heer van Berckenrode (1715–1797, The Hague) was a city-secretary and schepen in Amsterdam, then Dutch ambassador to France. Lestevenon played an important role in the year 1748 and in the negotiations for the Treaty of Paris. Pietro Locatelli dedicated six violin sonatas to him.

Lestevenon was born into a powerful regent family. His father was an administrator of the Dutch East India Company, heer of Strijen and four-times mayor of Amsterdam (between 1722 and 1736). Gerrit de Graeff (I.) van Zuid-Polsbroek, vrijheer van Zuid-Polsbroek, was his brother in law. In 1729, he got a job as city-secretary. In all probability, someone else did the work and Lestevenon's earnings funded his studies.

After an inheritance from a late aunt, Lestevenon bought a palace at Lange Voorhout on the Hague, with 16 servants. Mattheus Lestevenon married Lady Catharina Windsor, a sister of Viscount Windsor in London in 1742 and went on honeymoon to Italy. His wife died of smallpox on the return trip. She was buried in Bockenheim on May 26. Mattheus again inherited "considerable wealth and goods" ("considerabel veel gelt en goet") on the death of his father in 1743. Lestevenon was appointed schepen of Amsterdam in 1745. He moved to the attractive building at Keizersgracht 444-446. Because he was not appointed as a successor to his father, it is supposed he was frustrated. 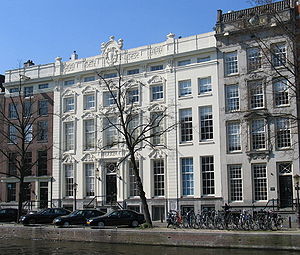 His mansion on Keizersgracht

After the Pachtersoproer (1748), the Doelisten invited prince William IV and requested to remove the inter-related regenten clique and to change the appointment of mayors. Of the forty mayors chosen between 1696–1748, only two (or, as some maintain, even just one) were not related to earlier mayors. Finally Lestevenon left the council of his own accord. The stadholder changed his opinion and more than half the men on the council got their seats back. Not long after that Mattheus Lestevenon was appointed ambassador to the court to Versailles.

In 1743 he had married Maria Wilhelmina, baroness of der Duyn .[1] His two children Maria Jacqueline and Willem Anne [2] were born in 1749 in Brussels[citation needed] and Paris respectively. On 8 June 1755 he divorced the baroness, probably while she conceived a child from an officer by the name M. De Villegagnon.[3] Lestevenon next married Susanna Faulquier in an unknown year. He sold his house on Keizersgracht to Thomas Hope.

Little is known on his activities as ambassador. Mostly it involved meetings with La Vauguyon on finishing the Fourth Anglo-Dutch War (1780–1784). Mattheus Lestevenon died in 1797 in the Hague. His son meanwhile played an important role as a Patriot.