Cranbury Township is a Township in Middlesex County, New Jersey, United States. As of the 2010 United States Census, the township population was 3,857.[5]

Cranbury CDP is a census-designated place and unincorporated area located within Cranbury Township. Its population was 2,181 as of the 2010 Census.[9] Despite the similarity in the name of the Township and the CDP, the two are not one and the same, as is the case for most paired Township / CDP combinations (i.e., a CDP with the same as the Township).

A deed for a sale of land and improvements dated March 1, 1698, is the earliest evidence of buildings constructed in present-day Cranbury. A home in Cranbury was used by Alexander Hamilton and the Marquis de Lafayette as a headquarters during the American Revolutionary War, and they were visited by General George Washington on June 26, 1778. As part of orders issued during the Presidency of George Washington, maps of Cranbury were made showing the presence of a church, a mill and 25 other buildings. During its earliest years, the location was usually spelled as "Cranberry". Rev. Joseph G. Symmes argued in 1857 that the name was spelled improperly and that the suffix "bury" was more appropriate, leading the name of the community and brook to be changed to "Cranbury" in 1869.[10]

Cranbury Township was incorporated as a township by an Act of the New Jersey Legislature on March 7, 1872, from portions of both Monroe Township and South Brunswick Township. Portions of the township were taken on April 1, 1919, to form Plainsboro Township.[11]

George Washington's headquarters were located in Cranbury while planning for the Battle of Monmouth, a major turning point during the American Revolutionary War.[12]

Cranbury's Main Street and surrounding area is rather distinctive, as most of the buildings date to the 18th or 19th century. The entire downtown area is designated as a Historic District, which was added to the National Register of Historic Places in 1980 as District #80002502.[13]

The township celebrated its tricentennial in 1998.[14]

Updike Parsonage Barn was relocated and reconstructed in 2010.[citation needed] 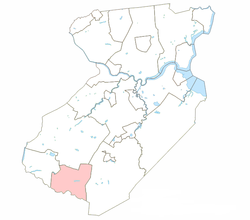 Cranbury Township is governed under the Township form of government with a five-member Township Committee. The Township Committee is elected directly by the voters in partisan elections to serve three-year terms of office on a staggered basis, with one seat coming up for election each year.[1] 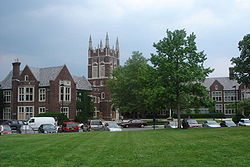 Cranbury is served by the Middlesex County College in Edison.

Cranbury is in close proximity to Princeton University.

Cranbury hosts U.S. Route 130 and a four-mile (6 km) section of Interstate 95 (the New Jersey Turnpike). Cranbury is accessible by the Turnpike in neighboring townships: Interchange 8 in East Windsor Township and Interchange 8A in Monroe Township. The Molly Pitcher Service Area is located at mile marker 71.7 on the southbound side.[33]

The New Jersey Turnpike Authority is planning to widen the Turnpike (with the "dual-dual" setup) between Exit 6 in Mansfield Township and Exit 8A in Monroe Township by 2014. This widening would require the condemnation of part of the Molly Pitcher Service Area as well as construction of new overpasses that cross the Turnpike. New entrance & exit ramps would be constructed as well to access the service area.[34]

Companies based in Cranbury Township include Blacklight Power, an alternative energy firm.

The Associated University Presses, an academic publishing company supplying textbooks to colleges and universities, is also based in Cranbury.

Notable current and former residents of Cranbury include: