The Library's famous Rose Main Reading Room (Room 315) is a majestic 78 feet (23.8 m) wide and 297 feet (90.5 m) long, with 52-foot (15.8 m) high ceilings. The room is lined with thousands of reference works on open shelves along the floor level and along the balcony, lit by massive windows and grand chandeliers, and furnished with sturdy wood tables, comfortable chairs, and brass lamps. It is also equipped with computers providing access to library collections and the Internet as well as docking facilities for laptops. Readers study books brought to them from the library's closed stacks. There are special rooms for notable authors and scholars, many of whom have done important research and writing at the Library. But the Library has always been about more than scholars; during the Great Depression, many ordinary people, out of work, used the Library to improve their lot in life, as they still do.[3]

The building was declared a National Historic Landmark in 1965.[2]

Marble on the library building is about three feet thick, and the building is marble and brick all the way through. The exterior is 20,000 blocks of stone, each one numbered in preparation for a renovation announced in 2007. It stretches 390 feet along Fifth Avenue.[4]

Two stone lions lie at either side of the stairway to the entrance. The famous lions guarding the entrance were sculpted by Edward Clark Potter. Their original names, "Leo Astor" and "Leo Lenox" (in honor of the library's founders) were transformed into Lord Astor and Lady Lenox (although both lions are male), and in the 1930s they were nicknamed "Patience" and "Fortitude" by Mayor Fiorello La Guardia, who chose the names because he felt that the citizens of New York would need to possess these qualities to see themselves through the Great Depression. Patience is on the south side (the left as one faces the main entrance) and Fortitude on the north.[3]

Two bronze flagpole bases, sculpted by Raffaele Menconi to a sketch by Thomas Hastings (1912) and cast at Tiffany Studios[5] exemplify the attention to detail in the structure's fittings

Before the end pavilions are flagpoles, whose sculpted bronze bases designed by Thomas Hastings in 1912 were realized by the sculptor Raffaele Menconi, who often worked closely with New York architects of the Beaux-Arts generation and had a deft command of the 16th century Italian Mannerist classical idiom that was required by Hasting's design. The bronzes were cast at Tiffany Studios in Long Island City. They were rededicated to New York's former Reform mayor, John Purroy Mitchell.

The New York Public Library main building during late stage construction in 1908. Lion statues not yet installed at the entrance.

The consolidation of several libraries into the New York Public Library in 1901, along with the large Tilden bequest and the Carnegie donation, allowed for the creation of an enormous library system befitting the nation's largest city, but the founders also wanted an imposing main branch. A prominent, central site for it was available at the two-block section of Fifth avenue between 40th and 42nd streets, then occupied by the Croton Reservoir, which was obsolete and no longer needed. Dr. John Shaw Billings who was named first director of the New York Public Library seized the opportunity. He knew exactly what he wanted there. His design for the new library became the basis of the landmark building that became the central Research Library (now known as the Humanities and Social Science Library) on Fifth Avenue.[3]

Billings's plan called for a huge reading room on top of seven floors of bookstacks combined with the fastest system for getting books into the hands of those who requested to read them. Following a competition among the city's most famous architects, the relatively unknown firm of Carrère and Hastings was selected to design and construct the new library. The result, regarded as the apex of Beaux-Arts design, was the largest marble structure up to that time in the United States. The cornerstone was laid in May 1902.[3] 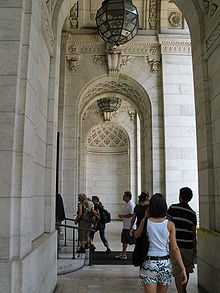 Cross-view of classical details in the entrance portico

Work progressed slowly but steadily on the Library which eventually cost $9 million to build. During the summer of 1905, huge columns were put into place and work on the roof was begun. By the end of 1906, the roof was finished and the designers commenced five years of interior work. In 1910, 75 miles of shelves were installed to house the collections that were set to make their home there, with plenty of space left for future acquisitions. It took a whole year to move and install the books that were in the Astor and Lenox libraries.[3]

On May 23, 1911, the main branch of the New York Public Library was officially opened. The ceremony was presided over by President William Howard Taft and was attended by Governor John Alden Dix and Mayor William Jay Gaynor.[3]

Entrance to the Public Catalog Room

The following day, May 24, the public was invited. The response was sensational. Tens of thousands thronged to the Library's "jewel in the crown." The opening day collection consisted of more than 1,000,000 volumes. The New York Public Library instantly became one of the nation's largest libraries and a vital part of the intellectual life of America. True to Dr. Billings' plan, library records for that day show that one of the very first items called for was N. I. Grot's Nravstvennye idealy nashego vremeni ("Ethical Ideas of Our Time") a study of Friedrich Nietzsche and Leo Tolstoy. The reader filed his slip at 9:08 a.m. and received his book just six minutes later.[3]

A video highlighting the map collection of NYPL

Over the decades, the research collection grew until, by the 1970s, it was clear that eventually the collection would outgrow the existing structure. So it was decided to make the library bigger by burrowing underground toward Bryant Park. In the 1980s the central research library added more than 125,000 square feet (11,600 m2) of space and literally miles of bookshelf space to its already vast storage capacity to make room for future acquisitions. This expansion required a major construction project in which Bryant Park, directly west of the library, was closed to the public and excavated. The new library facilities were built below ground level. The park was then restored on top of the underground facilities and re-opened to the public.

On July 17, 2007, the building was briefly evacuated and the surrounding area was cordoned off by New York police because of a suspicious package found across the street. It turned out to be a bag of old clothes.[6]

In the three decades before 2007, the building's interior was gradually renovated. In December 2005, the Lionel Pincus and Princess Firyal Map Division space, with richly carved wood, marble, and metalwork, was restored.[4]

On December 20, 2007, the library announced it will undertake a three-year, $50 million renovation of the building exterior, which has suffered damage from weathering and automobile exhaust. The Vermont marble structure and the sculpture elements on it were to be cleaned, 3,000 cracks were to be repaired, and restoration work would also be done on the roof, stairs, and plazas. All of the work was scheduled to be completed by the centennial in 2011.[7] New York Mayor Michael R. Bloomberg, on behalf of the library, asked the mayor of Paris to lend to New York the services of François Jousse, the city engineer responsible for lighting Paris' monuments, structures and official buildings. "My ambition is for this to be the building you simply must see in New York at nighttime because it is so beautiful and it is so important," library director Paul LeClerc said in 2007.[4]

As of 2004, streaks were already blackening the white marble and pollution and moisture were corroding the ornamental statuary, causing architectural details to erode, including the edges of cornices and features on carved faces. "Tiny particles of rubber scattered by passing car tires have accumulated on the building, mixing gradually with water to turn the marble into gypsum, which causes the outer layer to crumble in a sugaring effect," according to an article in The New York Times.[4]

By late 2007, library officials had not yet decided whether to try to restore damaged sculptural elements or just clean and "stabilize" them. Cleaning would be done either with lasers or by applying poultices and peeling them off.[4]

In 2008, the library announced that the main branch building would be renamed in honor of Stephen A. Schwarzman, in recognition of his agreement to donate $100 million toward the renovation and expansion of the building.[8] 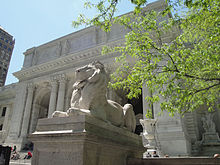 At the entrance to the New York Public Library

The building has frequently appeared or been referenced in artistic, literary, and cultural works.

It was featured in the 1978 film The Wiz when Dorothy and Toto stumble across it, one of its comes to life, and joins them on their journey out of Oz. It was a major location in the 2004 apocalyptic science fiction film The Day After Tomorrow, and also appears in the Futurama parody of the film, in the episode "The Day the Earth Stood Stupid." It is also featured prominently in the 1984 film Ghostbusters, when a a librarian in the basement reports seeing a ghost which becomes violent when approached. It serves as the backdrop for a central plot development in the 2002 film Spider-Man Additionally, the building is featured as a wedding venue in the 2008 film Sex and the City.

In television, the library was featured in the "The Library" episode of Seinfeld, in which Cosmo Kramer dates a librarian there, Jerry Seinfeld is accosted by a library cop named Mr. Bookman for late fees, and George Costanza encounters his high school gym teacher living homeless on its stairs. It is the setting for much of "The Persistence of Memory," the eleventh part of Carl Sagan's Cosmos TV series. It also appears in the pilot episode of the ABC series Traveler (as the fictional Drexler Museum of Art) as a backdrop and brief meeting place for characters and in the third season of the CW series Gossip Girl, and the interior was used as the interior of Unity Hall, the capitol of the fictional Kingdom of Gilboa, in the NBC series Kings.

In literature and poetry

The Library also appears in literature. Lynne Sharon Schwartz's Writing on the Wall (2005) features a language researcher at NYPL who grapples with her past following the September 11 attacks. Cynthia Ozick's novel Heir to the Glimmering World (2004) set just prior to World War II, involves a scholar who has fled from Nazi Germany researching the Karaite Jews at NYPL. Matthew Reilly's novel Contest (1996) sets an intergalactic gladiatorial fight in the NYPL, resulting in the building's total destruction. Jerome Badanes' novel The Final Opus of Leon Solomon (1985) is based on the real-life tragedy of an impoverished scholar who stole books from the Jewish Division of the Library, only to be caught and commit suicide. A lightly fictionalized portrait of the Jewish Division's first chief, Abraham Solomon Freidus, is found in a chapter of Abraham Cahan's The Rise of David Levinsky (1917).

Lawrence Blochman's Death Walks in Marble Halls (1942) features a murder committed using a brass spindle from a catalog drawer. Jane Smiley's Duplicate Keys (1984), also a murder mystery, featured an NYPL librarian who stumbles upon two bodies of people who died in 1930. Allen Kurzweil's novel The Grand Complication (2001) is the story of an NYPL librarian whose research skills are put to work finding a missing museum object. Donna Hill, who was herself an NYPL librarian in the 1950s, set her novel Catch a Brass Canary (1965) at an NYPL branch library.

Several poems involve the Library, including E. B. White's "A Library Lion Speaks" and "Reading Room" in Poems and Sketches of E.B. White (1981); Richard Eberhart's "Reading Room, The New York Public Library," in Collected Poems, 1930-1986 (1988); and Lawrence Ferlinghetti's "Library Scene, Manhattan," in How to Paint Sunlight (2001). Excerpts from several of the many memoirs and essays mentioning the New York Public Library are included in the anthology Reading Rooms (1991), including reminiscences by Alfred Kazin, Henry Miller, and Kate Simon.