The Pacific Dogwood, Cornus nuttallii (syn. Benthamidia nuttallii), is a species of dogwood native to western North America from lowlands of southern British Columbia to mountains of southern California. An inland population occurs in central Idaho. Cultivated examples are found as far north as Haida Gwaii. It is a small to medium-sized deciduous tree, reaching 10-25 m tall. 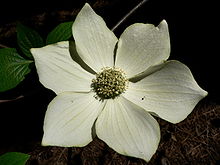 The leaves are opposite, simple oval, 8-12 cm long and 5-8 cm broad. The flowers are individually small and inconspicuous, 2-3 mm across, produced in a dense, rounded, greenish-white flowerhead 2 cm diameter; the 4-8 large white "petals" are actually bracts, each bract 4-7 cm long and broad. The fruit is a compound pink-red berry about 3 cm diameter, containing 50-100 small seeds; it is edible, though not very palatable.

Like the related Flowering Dogwood, it is very susceptible to dogwood anthracnose, a disease caused by the fungus Discula destructiva. This has killed many of the larger plants in the wild and also restricts its use as an ornamental tree.

Cornus nuttallii is named after Thomas Nuttall, an English botanist and zoologist who worked in the America in the nineteenth century.

Some Plateau Indian tribes used the bark as a laxative and to induce vomiting.[1]

It is the provincial flower of British Columbia.[2] It was protected by law there (along with Rhododendron macrophyllum and Trillium ovatum in the same act),[3] but the protection was repealed in 2002.[4]

Students who graduated from a BC High School curriculum program are awarded the "Dogwood Diploma" from the Ministry of Education[5] (Officially, British Columbia Certificate of Graduation).