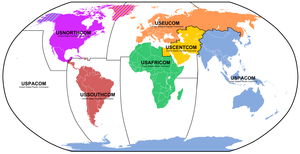 EUCOM Area of responsibility in orange

The United States European Command (EUCOM) is one of ten Unified Combatant Commands of the United States military, headquartered in Stuttgart, Germany. Its area of focus covers 21,000,000 square miles (54,000,000 km2) and 51 countries and territories, including Europe, Russia, Iceland, Greenland, and Israel. The Commander of EUCOM simultaneously serves as the Supreme Allied Commander, Europe (SACEUR) within NATO.

During the Cold War and the Kosovo War, EUCOM was the lead command for potential operations. During the Gulf War and Operation Northern Watch, EUCOM controlled the forces flying from Incirlik Air Base.

America's rapid post-war demobilization, followed by the end of the occupation of Germany in 1949, led many to question the United States' commitment to defend Western Europe against the spread of communism. Western nations questioned how they could provide for the common defense and simultaneously questioned America's role in such defense. In 1948–1949, the Berlin Blockade motivated Western Europe and the United States to create a military alliance. In 1949, the allies established the North Atlantic Treaty Organization (NATO).

In early 1951, NATO established Allied Command Europe and the Supreme Headquarters Allied Powers Europe (SHAPE). General Dwight D. Eisenhower was called from retirement to become the first Supreme Allied Commander Europe (SACEUR). The United States sent massive reinforcements to Europe designed to deter the Soviet Union. From 1950 to 1953 United States military personnel in Europe grew from 120,000 to over 400,000. United States Air Forces in Europe grew from three groups with 35,000 personnel to eleven wings with 136,000 personnel. Sixth Fleet in the Mediterranean doubled to more than 40 warships. United States Army, Europe, grew from one infantry division and three constabulary regiments to two corps with five divisions (including two mobilized National Guard divisions) and in November 1950 activated a new field army, Seventh Army, at Patch Barracks, Stuttgart. The Army activated the 10th Special Forces Group at Fort Bragg in 1952 and deployed it to Bad Töltz in November 1953 for unconventional warfare missions in the Soviet Bloc countries. To provide for national command within NATO and to help control this build-up of forces, Gen. Eisenhower proposed a separate command for all United States forces in Europe. Because the senior United States commander would continue as Supreme Allied Commander Europe, Eisenhower recommended giving "a maximum of delegated authority" to a four-star deputy.

Civil war broke out in Lebanon in 1958 due to mounting religious and political conflicts (see "1958 Lebanon crisis"). EUCOM conducted a major contingency operation, Operation Blue Bat, in response to Lebanon's request to restore stability within the government.

In 1966, disagreements within NATO over involvement in the Vietnam War prompted France to demand the removal of all US and NATO headquarters and forces from French soil. The following year, SHAPE moved to Mons, Belgium, while Headquarters EUCOM moved to Patch Barracks in Stuttgart, Germany. Headquarters Seventh Army moved to Heidelberg, where it merged with Headquarters United States Army, Europe. At Patch Barracks, EUCOM renovated the buildings, built a new operations center, modernized communications infrastructure and improved the airfield.

EUCOM continued to prepare for the defense of Europe and began a series of annual REFORGER (Return of Forces to Europe) exercises in 1967. Cold War crises continued, including the 1968 Warsaw Pact invasion of Czechoslovakia. But, because of the Vietnam War, the number of the American forces in Europe slowly declined. Troop strength in Europe fell to 265,000 by 1970.

During the 1970s, force protection concerns in Europe increased as terrorist groups, such as the Red Army Faction and the Red Brigades, targeted American facilities and personnel with bombings, kidnapping and assassinations. Palestinian terrorist organizations conducted terror operations in Europe, such as the kidnapping of Israeli athletes during the 1972 Summer Olympics in Munich.

EUCOM and its components continued to provide military assistance throughout Europe, as well as humanitarian assistance, disaster relief, noncombatant evacuation, support to peacekeeping operations, and other non-traditional missions in Europe, Africa and the Middle East. For example, after the Congo became independent in 1960, EUCOM joined in several multinational operations in that country, including peacekeeping, humanitarian assistance, and noncombatant evacuation in 1960, 1964, 1967 and again in 1978. In the Middle East, EUCOM provided military assistance to Israel as well as noncombatant evacuation of American citizens in 1967, 1973, and 1982–1984.

During the 1980s, American forces in Europe increased to over 350,000. EUCOM established Fleet Marine Force Europe (later MARFOREUR) in 1980. The Unified Command Plan (UCP) was changed in 1983 to transfer responsibility for the Middle East from EUCOM to a new combatant command, U.S. Central Command, but EUCOM retained responsibility for Israel, Lebanon and Syria. At the same time, EUCOM was formally assigned responsibility for Africa south of the Sahara.

During the 1980s, negotiations continued with the Soviet Union on strategic and theater-level arms limitation. In 1987, the Intermediate-Range Nuclear Forces (INF) Treaty called an end to the deployment of SS-20s, Pershing IIs and GLCMs. In 1990, NATO and Warsaw Pact members signed a treaty on conventional armed forces in Europe (CFE).

In 1989, the Soviet Union and other Soviet Bloc countries in Eastern Europe collapsed and the Cold War came to an end. The citizens of a reunified Berlin tore down the Berlin Wall on 6 November 1989. As a sign of reduced tensions, in 1991 EUCOM took its airborne command post off alert. Meanwhile in 1991, EUCOM and its components provided forces to CENTCOM for Operation Desert Storm.

EUCOM supports programs in former Soviet Bloc countries such as the Joint Contract Team Program, NATO Partnership for Peace and the National Guard Bureau State Partnership Program. It was also active in operations in the Balkans, including Bosnia, Macedonia and Kosovo. During this time, EUCOM's assigned forces were lowered below 120,000.

Since 1990, EUCOM has hosted or co-hosted the annual International Military Chiefs of Chaplains Conference, the only one of its kind in the world, working to foster cooperation among religious leaders and understanding of religion as both a force for war and a force for peace.

Immediately after the terrorist attacks against New York and Washington, D.C., on 11 September 2001, NATO invoked Article V of the treaty and deployed NATO early warning aircraft to help monitor the skies over North America. EUCOM provided major forces for subsequent operations in Afghanistan and stepped up its efforts to protect United States interests in Europe and Africa. Subsequent terrorist attacks in the EUCOM theater in Casablanca, Madrid, London and Algiers prompted EUCOM to launch Operation Enduring Freedom Trans-Sahara in 2007 while continuing to provide rotational forces to Afghanistan and Iraq.

In 2003, the headquarters reorganized to establish the EUCOM Plans and Operations Center (EPOC). From 2006 to 2008, EUCOM helped stand-up a new geographic unified combatant command, United States Africa Command (AFRICOM), which took over responsibility for Department of Defense activities in Africa on 1 October 2008.

The following list details all operations in which EUCOM has been involved since its inception.[1]

The Seventh Army is based in Germany. It controls one corps, parenting four combat and one aviation brigade. Previously it had two divisions, although for almost all of the Cold War it controlled two corps of two divisions each.

The Sixth Fleet provides ships to NATO Joint Force Command Naples' Operation Active Endeavour, deterring threats to shipping in the Straits of Gibraltar and the remainder of the Mediterranean. Joint Task Force Aztec Silence, a special operations force established under the command of Commander, Sixth Fleet, has been involved in fighting Operation Enduring Freedom - Trans Sahara. It also has a growing role around the shores of West and East Africa, under the direction of United States Africa Command. It previously had a significant Mediterranean presence function against the Soviet Navy's Fifth Squadron (Mediterranean Squadron), and for most of the Cold War was the most powerful maritime striking force along NATO's southern flank.

The HQ Air Command Europe, the Wing-support command, and the Third Air Force, USAFE's Warfighting Headquarters, both based at Ramstein Air Base in Germany form U.S. Air Forces Europe (USAFE). They are now much reduced from their high Cold War strength and provide a pool of airpower closer to many trouble spots than aircraft flying from the United States.

A subordinate unified command of EUCOM is SOCEUR (Special Operations Command Europe), headquartered at Patch Barracks in Stuttgart-Vaihingen, Germany. The commander of SOCEUR is Major General Michael S. Repass. Special forces units within the AOR include the 352nd Special Operations Group of the USAF, based at RAF Mildenhall in the UK, a U.S. Navy SEALs unit, and Naval Special Warfare Unit 2 and 1st BN, 10th Special Forces Group located in Germany.

EUCOM is also headquartered at Patch Barracks in Stuttgart-Vaihingen, Germany. The Iceland Defense Force also formed part of EUCOM from 2002 to 2006, when it was transferred from Joint Forces Command in the October 2002 Unified Command Plan change.[2]

Previously, this position held the title "Commander-in-Chief (CINC), United States European Command". However, following an order dated 24 October 2002 by Secretary of Defense Donald Rumsfeld, all CINCs in the United States military were retitled "Commanders" and the use of "CINC" as an acronym was forbidden.[3]