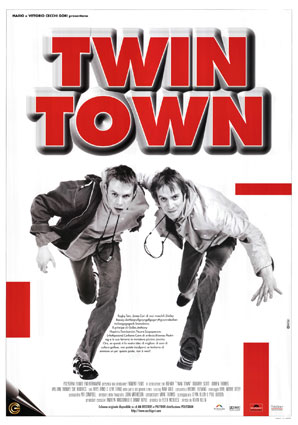 "Twin Town" is a 1997 film made and set in , south , although some parts were filmed in . It was directed by Kevin Allen and was originally intended to be called Hot Dog, a hot dog van was featured in a number of scenes in the film. It stars real-life brothers and and also features . In typical style the director appears on screen, briefly seen as a show host on a TV set in the static caravan home of the twins.

The Lewis "twins" of the title are not twins but brothers. They spend their lives stealing cars, sniffing glue and challenging each other to a "... huge toke (of ) on the bong." Fatty Lewis, their father, falls from a ladder whilst doing roofing work for Bryn Cartwright, a wealthy, prominent local businessman and small-time gangster. The twins attempt to demand compensation for the accident. Bryn refuses. The twins take revenge by ruining a local competition in which Bryn's daughter, beautiful Bonny is singing, by urinating on her during the performance. Bryn and Terry Walsh, a corrupt police detective, beat up the twins.

As retaliation continues, the spirals out of control, progressing with the beheading of the Cartwrights' pet poodle to Terry Walsh setting fire to the Lewises' dog's kennel; a gas bottle explodes, destroying the Lewises' and causing the deaths of the twins' family, leading to the murder of Bryn by the twins in retaliation.

The twins grant their father's wish of having a burial at sea, with the coffin respectfuly draped in the Welsh flag. The film's only poignant moment ensues as the local choir (played by Fardref Male Voice Choir) sing the song "" in Welsh at the end of pier. Meanwhile, however, Terry Walsh, his eyes terrified and pleading, has been gagged and bound to the coffin, which rapidly sinks.

The twins are last seen sailing out to sea, heading for , a symbolic promised land.

Throughout the film are subplots that tie the characters together and give them substance as well as providing honest, realistic and hilarious comedy. The overall impression is of an amoral section of society where corruption is normal, even the vicar is bought. The police are the criminals, and everyone else switches between crime and honest living as easily as changing clothes. Despite this the central story tells of an important, if unconventional, family bond.

Due to the involvement of "Trainspotting" 's director and producer as s, and to the bleak portrayal of life revolving around drugs and petty (and less petty) crime, "Twin Town" is often described as a "Welsh "Trainspotting", a comparison which is almost equally often decried.Fact|date=February 2007

"" described the film as "a plain misfire", but praised the brothers' performances as showing a lot of promise. [http://www.timeout.com/film/79929.html] Amateur reviewers have been more positive. For example Yahoo site visitors gave the film a B+ rating and Amazon reviews averaged 4½ stars. Many of the reviewers seem to have tried to compare this with other films such as "Trainspotting", whereas people who most enjoyed the film talk about it on its own merits. The film is also noted for having many uses of the word "fuck".

Most of the original cast of the movie gave a reading of the script at the Festival in April 2007. The performance proved to be interactive - most of the audience knew the script by heart, providing an accompaniment to the actors.

The film was given four stars from "".