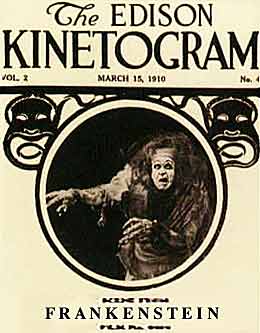 "Frankenstein" is a 1910 film made by that was written and directed by . It was the first motion picture adaptation of 's "". The unbilled cast included as , Charles Ogle as the Monster, and as the doctor's .

Shot in three days, it was filmed at the Edison Studios in the , . Although some sources credit as the producer, he in fact played no direct part in the activities of the motion picture company that bore his name.

From "The Edison Kinetogram":
Frankenstein, a young student, is seen bidding his sweetheart and father goodbye, as he is leaving home to enter a college in order to study the sciences. Shortly after his arrival at college he becomes absorbed in the mysteries of life and death to the extent of forgetting practically everything else. His great ambition is to create a human being, and finally one night his dream is realized. He is convinced that he has found a way to create a most perfect human being that the world has ever seen. We see his experiment commence and the development of it. The formation of the hideous monster from the blazing chemicals of a huge cauldron in Frankenstein's laboratory is probably the most weird, mystifying and fascinating scene ever shown on a film. To Frankenstein's horror, instead of creating a marvel of physical beauty and grace, there is unfolded before his eyes and before the audience an awful, ghastly, abhorrent monster. As he realizes what he has done Frankenstein rushes from the room, only to have the misshapen monster peer at him through the curtains of his bed. He falls fainting to the floor, where he is found by his servant, who revives him.

After a few weeks' illness, he returns home, a broken, weary man, but under the loving care of father and sweetheart he regains his health and strength and begins to take a less morbid view of life. In other words, the story of the film brings out the fact that the creation of the monster was only possible because Frankenstein had allowed his normal mind to be overcome by evil and unnatural thoughts. His marriage is soon to take place. But one evening, while sitting in his library, he chances to glance in the mirror before him and sees the reflection of the monster which has just opened the door of his room. All the terror of the past comes over him and, fearing lest his sweetheart should learn the truth, he bids the monster conceal himself behind the curtain while he hurriedly induces his sweetheart, who then comes in, to stay only a moment. Then follows a strong, dramatic scene. The monster, who is following his creator with the devotion of a dog, is insanely jealous of anyone else. He snatches from Frankenstein's coat the rose which his sweetheart has given him, and in the struggle throws Frankenstein to the floor, here the monster looks up and for the first time confronts his own reflection in the mirror. Appalled and horrified at his own image he flees in terror from the room. Not being able, however to live apart from his creator, he again comes to the house on the wedding night and, searching for the cause of his jealousy, goes into the bride's room. Frankenstein coming into the main room hears a shriek of terror, which is followed a moment after by his bride rushing in and falling in a faint at his feet. The monster then enters and after overpowering Frankenstein's feeble efforts by a slight exercise of his gigantic strength leaves the house.

Here comes the point which we have endeavored to bring out, namely: That when Frankenstein's love for his bride shall have attained full strength and freedom from impurity it will have such an effect upon his mind that the monster cannot exist. This theory is clearly demonstrated in the next and closing scene, which has probably never been surpassed in anything shown on the moving picture screen. The monster, broken down by his unsuccessful attempts to be with his creator, enters the room, stands before a large mirror and holds out his arms entreatingly. Gradually, the real monster fades away, leaving only the image in the mirror. A moment later Frankenstein himself enters. As he stands directly before the mirror we are amazed to see the image of the monster reflected instead of Frankenstein's own. Gradually, however, under the effect of love and his better nature, the monster's image fades and Frankenstein sees himself in his young manhood in the mirror. His bride joins him, and the film ends with their embrace, Frankenstein's mind now being relieved of the awful horror and weight it has been laboring under for so long.

For many years, this film was believed to be a . In 1963, a plot description (reprinted above) and stills were discovered published in the March 15, 1910 issue of an old Edison film catalog, "The Edison Kinetogram".

In the 1950s, a print of this film was purchased by a film collector, , who did not realize its rarity until many years later. Its existence was first revealed in the mid-1970s. Although somewhat deteriorated, the film was in viewable condition, complete with titles and tints as seen in 1910. Detalff had a 35 mm preservation copy made by the in the late 1970s.

In 2003, this particular film version of "Frankenstein" was adapted as a 40-page , written by Chris Yambar and drawn by Robb Bihun. Called "Edison's Frankenstein 1910", in the spirit of the film it is drawn in black-and-white and told through narration only, without dialogue.