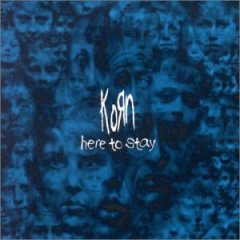 "Here to Stay" is a -winning song by that appears on the band's fifth studio album "Untouchables" as an album opener and the first single. The song won the , as well as winning an award for Best International Video on in 2002 and being nominated for the Best Rock Video by in 2002. The video for this single, directed by was highly successful, and gained frequent airplay on MTV and MuchMusic in particular, featuring the band members on a TV screen amongst major world issues of the time. The song has become a staple of the band's live show to this day.

In the concert version of the song small changes are made to the song, such as the guitar riff played by Head in the background is removed during the outro of the song. Also the line "Fucked up feelings again" in the pre-chorus of the song is often left for the audiences to sing instead of Davis while rest of the band members momentarily stop playing their instruments in order to hear the audiences' voices clearer. The song has become a staple of the band's live show to this day. It is often played as their opening number.

The portrays a boy watching on TV while flipping channels between shows (which consist of real-world events) and the band playing in the TV against a static backdrop. In the end, Davis takes the boy into the TV. The video for "Here to Stay" also marks the first video appearance of Davis's unique microphone stand designed by . There is also a "clean" version of the music video which shows the boy being taken into the TV at the beginning. This version omitted the explicit words and all of the real-event videos. The point of view is "inside" the TV instead of outside it. This version is the one shown at 's official channel.

References to other songs

"Here to Stay" is featured on the soundtrack to .

is in the adverts of the Spanish channel during the . In them, some players like and fight with a robots to win the ball. The spots are like the .A little sample of the beginning of the song (the principal riff) can be ear at the end of the advert.

Korn released a limited edition Here to Stay box set, which included all 3 singles including the DVD single. There is also a promo single of "Here to stay - Mindless self indulgence Remix" Which is quite hard to get hard of hence it being a Promo, it includes one track which is the remix by . The Remix is also found on the DVD single of "Thoughtless".