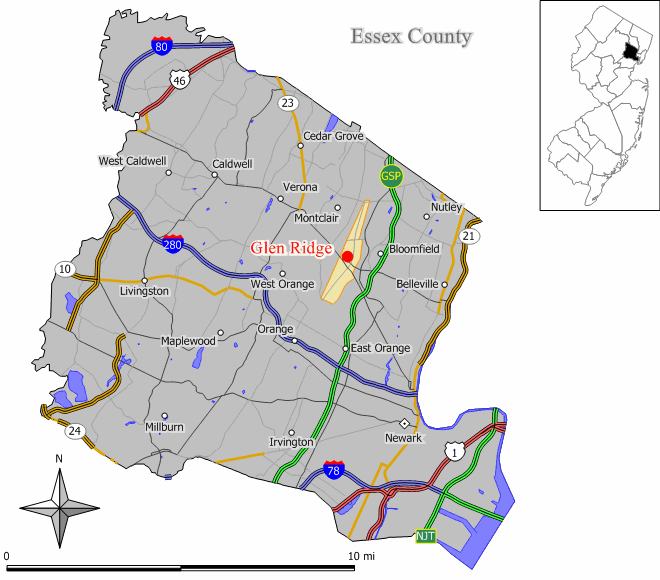 Glen Ridge is a borough in Essex County, , . As of the , the borough population was 7,271. Glen Ridge's public school system is one of the top-ranked in the state. Glen Ridge was incorporated as a borough by an Act of the on , , from portions of Bloomfield Township, based on the results of a referendum held the previous day.

Of the many legacies left to the town by its founders, the one that has become its trademark is the gas lamps. With only 3,000 gaslights remaining in operation in the entire United States, Glen Ridge has 665 such lamps lighting its streets. [Read, Phillip. "In Glen Ridge, the future has a Manhattan flair and a French twist; Work begins on a big ratable: Luxury condos with the fancy name", "", , .] In 1924, Glen Ridge became the first municipality in New Jersey to establish a ordinance. [Peterson, Mary Jo; and Gebeloff, MArk. "WHERE HOUSES DEFY THE DECADES; It's no accident that most Glen Ridge homes are old: The town sees red if you defy the blueprints.", "', , .]

According to the , the borough has a total area of 1.3 square miles (3.3 km²), all of it land. It is bounded by Bloomfield, Montclair, Orange and East Orange.

Glen Ridge is at the most six blocks wide. In the borough north of Bay Avenue, "the Panhandle", it is only three or two blocks wide.

There were 2,458 households out of which 46.3% had children under the age of 18 living with them, 69.9% were married couples living together, 8.1% had a female householder with no husband present, and 19.5% were non-families. 16.7% of all households were made up of individuals and 8.0% had someone living alone who was 65 years of age or older. The average household size was 2.95 and the average family size was 3.33.

Glen Ridge is governed under the Borough form of New Jersey municipal government. The government consists of a Mayor and a Borough Council comprising six council members, with all positions elected at large. A Mayor is elected directly by the voters to a four-year term of office. The Borough Council consists of six members elected to serve three-year terms on a staggered basis, with two seats coming up for election each year. ["2005 New Jersey Legislative District Data Book", , April 2005, p. 148. Text shows Glen Ridge as a borough both for type of government and form of government.]

The Glen Ridge Civic Conference Committee (est. 1913), made up of delegates from the community and from local civic organizations, provides a non-partisan method of candidate selection for Borough elections. The CCC endorsement has been very influential; in some years, not a single local official won election without it. The eight organizations currently sending delegates to the CCC are: The Democratic Club, Freeman Gardens Association, Friends of the Glen Ridge , The Glen Ridge Historical Society, The Northside Association, The Republican Club, The Golden Circle, The South End Association and the Women's Club of Glen Ridge.

In recent years, the CCC has been severely weakened both by changing attitudes in the town, the actions of a number of town residents, and internal problems within the CCC itself. The previous mayor, Carl Bergmanson, is the first mayor in the history of the CCC to win that office without the Committee's endorsement. A member of the council for three terms, he ran for mayor in 2000, losing to the CCC candidate Steven Plate. When Plate was appointed as the CCC candidate again in 2004 (violating the committee's precedent of one term per mayor), Bergmanson ran again, and won, gaining the majority in all but one of the town's districts. However, the CCC is still clearly in control of the town's political structure; generally, anti-CCC candidates will run as independents, and the Democratic and Republican parties are not forces in local elections.

In national and state politics, Glen Ridge leans toward the Democratic Party. In the 2004 presidential election, Democrat received 59% of the votes. In 2005, Democratic candidate for governor polled a similar proportion of the votes.

Glen Ridge traces its beginning to 1666 when sixty-four families led by bought land from the Native Americans and named it New Ark to reflect a covenant to worship freely without persecution. The territory included the future towns of Bloomfield, Montclair, Belleville and Nutley. When Bloomfield seceded in 1812, Glen Ridge was a section "on the hill" composed mostly of farms and woodlands with the exception of a thriving industrial area along the Toney's brook in the Glen. For most of the nineteenth century, three water-powered mills produced lumber, calico, pasteboard boxes and brass fittings. A and a were nearby.

With the arrival of the in 1856, and the construction of the Glen Ridge Train Station, and also the in 1872, Glen Ridge began its transition to a suburban residential community. Stately homes slowly replaced orchards and wooded fields.

Residents "on the hill" became unhappy with their representation on the Bloomfield Council. In spite of repeated requests to Bloomfield officials, roads remained unpaved, water and sewer systems were nonexistent, and schools were miles away. Area residents marked out the boundaries of a convert|1.45|sqmi|km2|sing=on area to secede from the adjoining town. At the , , election, the decision to secede passed by only twenty-three votes. Robert Rudd was elected the first mayor of Glen Ridge.

In 1989, athletes from the high school were involved in a brutal sexual assault of a mentally handicapped student with a baseball bat and a broom stick. The boys accused in the case were found guilty of first-degree aggravated sexual assault, and were given short prison and probation terms. The boys who were involved included twin brothers Kevin and Kyle Scherzer, brothers Paul and Chris Archer, Bryant Grober, and Richard Corcoran Jr. Others were present at the rape, but were not convicted because they did not participate. Author wrote about the incident in [http://www.ucpress.edu/books/pages/6990.html "Our Guys: The Glen Ridge Rape and the Secret Life of the Perfect Suburb"] . Lefkowitz's book was adapted into the 1999 TV movie [http://www.imdb.com/title/tt0199920 "Our Guys: Outrage at Glen Ridge"]

The serve students in pre-kindergarten through twelfth grade. Schools in the district (with 2005-06 enrollment data from the [ [http://nces.ed.gov/ccd/schoolsearch/school_list.asp?Search=1&DistrictID=3405940 Data for the Glen Ridge Public Schools] , . Accessed , .] ) are two elementary schools — Linden Avenue School (255 students) and Forest Avenue School (286) — Ridgewood Avenue School for grades 3-6 (547) and
for grades 7-12 (726).

[http://www.glenridge.org/raues/index.html Ridgewood Avenue School] houses students in grades 3-6. In addition to an academic curriculum in the major disciplines of language arts literacy, mathematics, social studies, and science, students are exposed to art, instrumental and vocal music, physical education, health, library skills and Spanish. Students in grades five and six are required to move through the stations of the Synergistics Lab, solving real world problems through the study of mathematics, science, and technology.

houses students in grades 7-12. Excellence in academic preparation is valued in both the school and community cultures. Standardized test scores far exceed both the state and national averages. More than 98% of the graduates from the Class of 2004 went on to study at four or two year colleges and universities. The remaining graduates continue their education in trade or technical schools, or in the armed services, while others find employment. The Class of 2004 average scores were 583 on the math section and 591 on the verbal section. (Compared to a New Jersey average of 514 math, 501 verbal and USA average of 518 math, 508 verbal.) Over the past four years the graduation rate has been approximately 99%, while 100% of students pass the New Jersey (HSPA). The High School is accredited by the and has been cited for excellent curricular and co-curricular programs.

In order to fund its outstanding school system, Glen Ridge residents pay high property taxes, about $12,431 in 2003 for a home assessed at the Borough average. This has led to what one local columnist has dubbed "the Glen Ridge syndrome," whereby young families are enticed to move into town by the high quality of the school system (as realtors will often point out, you can deduct your local property taxes from your federal tax return, but not private school tuition), and then these same families are chased out of town by the tax bills immediately following the graduation of their youngest child from high school. It is not unheard of to see two lawn signs in the same yard, one congratulating the child for graduation, and the other announcing that the house is for sale. There was at least one in 2005.