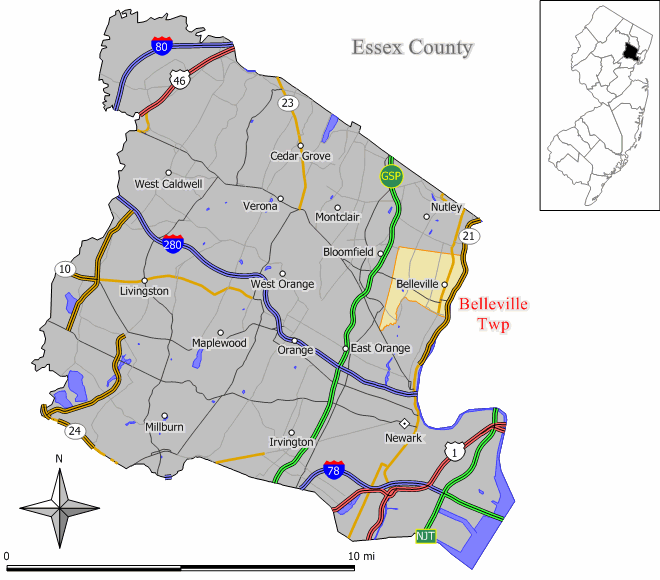 Belleville was originally incorporated as a township by an Act of the on , , from portions of Bloomfield. Portions of the township were taken to create Woodside Township (, , now defunct) and Franklin Township (, , now known as Nutley). The independent municipality of Belleville city was created within the township on , , and was dissolved on , . On , , Belleville was reincorporated as a town, based on the results of a referendum held eight days earlier.

There were 13,731 households out of which 29.5% had children under the age of 18 living with them, 47.0% were married couples living together, 13.9% had a female householder with no husband present, and 33.8% were non-families. 27.9% of all households were made up of individuals and 9.1% had someone living alone who was 65 years of age or older. The average household size was 2.60 and the average family size was 3.23.

Belleville is governed under the form of New Jersey municipal government by a seven-member Township Council. Two members of the council are elected at-large, one is elected as a mayor, and one each from four wards. Members are elected to serve four-year terms of office on a staggered basis.

On the national level, Belleville leans toward the Democratic Party. In 2004, Democrat received 52% of the vote here, defeating Republican , who received around 47%.

Route 7 and as well as County Route 506 all pass through Belleville.

Belleville locations in "The Sopranos"

* Episode 3 (""): Christopher Moltisanti's "mock execution" is on the pier in the Passaic River used by [http://www.belleville.k12.nj.us/Bhs/index.htm Belleville High School] 's crew team (technically, perhaps, in Kearny).
* Episode 28 (""): Livia Soprano's funeral is held at the Irvine-Cozzarelli Memorial Home, across the street from [http://www.belleville.k12.nj.us/BMS/index.htm Belleville Middle School] on Washington Avenue. Also take a Cab from the Belleville Taxi ServiceSeason 4- Even though Furio Guinta's house stated it was in Nutley, the actual location of the house is in Belleville on Essex Street.

*Originally known as "Second River," the inhabitants renamed the settlement "Belleville" in 1797. Today, the Second River forms much of the border between Belleville and Newark as it runs through , home to an annual [http://www.branchbrookpark.org/ Cherry Blossom Festival] .
*The township of Belleville has given itself the nickname "the Cherry Blossom Capital of America".
*Belleville is mentioned several times in the -winning musical "".