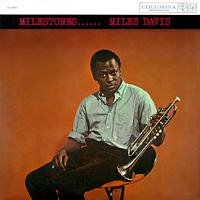 "Milestones" is an album recorded in February and March 1958 by . It is renowned for including Miles' first forays into the developing experiments, as noticed on the piece "Miles" (renamed 'Milestones'), which would be followed to its logical conclusion on . Furthermore, the playing of his sextet, which featured and contributing on such tracks as "Straight No Chaser", have induced it to be highly regarded by musicians, fans and critics alike. It was also the last time the rhythm section of Jones, Garland and Chambers would ever play with Miles on record.

Coltrane returned to Davis’s group in 1958, contributing to the “modal phase” albums Milestones (1958) and Kind of Blue (1959), both considered essential examples of 1950s modern jazz. Davis at this point was experimenting with modes—i.e., scale patterns other than major and minor. [http://www.britannica.com/EBchecked/topic/1286546/Milestones Encyclopedia - Britannica Online EncyclopediaProvides complete text of Encyclopaedia Britannica with search capabilities, related...]

"Billy Boy" is a trio performance by Garland, Chambers and Jones. CD reissues include alternate takes of "Two Bass Hit", "Milestones" and "Straight, No Chaser".