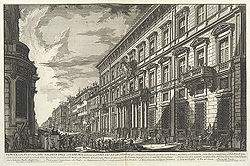 Mancini was one of the oldest families of Roman nobility. Their titles and fiefs were numerous: Duke of Nevers and Donzy, Prince of Vergagne and of the Holy Roman Empire with the treatment of Serene Highness, French Peer, Spanish Grandee, Marquis of Fusignano, Count of Montefortino, Viscount of Clamecy, Baron of Tardello, Tumminii and Ogliastro, Lord of Claye-Souilly, Roman noble and Venetian patrician. They were knights of the Order of the Golden Fleece, of the Order of the Holy Spirit, of the Order of Saint Michael, of the Sovereign Order of Saint John of Jerusalem and many more. The humanist Marco Antonio Altieri (1457–1537) includes them in Li Nuptiali, an important collection of news about Rome in the 16th century.

Of Roman origin, the family has thousand-year roots in Italy, and traditionally asserts a line of descent from the gens Hostilia, whose a line took the surname Mancinus and whose Lucius Hostilius Mancinus was Consul in 608 "ab Urbe condita".

The coat of arms of the House of Mancini de Lucij

The coat of arms of the House of Mancini-Mazarini

The Mancini family was called de Lucij (or simply Lucij) [1][2] in Rome for the fishes on its coat of arms. Many of the members were "Conservatori all'Urbe". The first known member of the family is Lucio Mancini who lived in 990. In the centuries the family had various lines that thrived with nobility everywhere, particularly at Fermo where the first memories go back to 1160 giving to the city Priori, Consoli, Gonfalonieri and Dottori, but the most important are:

The family coat of arms had inspired the heraldry of the french commune of Liernais.

The family is still perpetuated with various lines deriving from the Naples line , the only one survival, that was restored in the roman patriciate in 1745, among which the noble Federico Mancini (London 1951), Aldo Mancini (Foggia 1938), Count of Montefortino and knight of the Sovereign Order of Saint John of Jerusalem, and of the Teutonic Order, and the son Giorgio Mancini (Rome 1974), and the San Vittore line (from the hamlet of San Vittore del Lazio where the family got wide terrains and properties) founded by the Count Antonio Mancini in 1800 with his representative Adriano Fulvio Mario Mancini (Rome 1952) and the son Federico Adriano Mario La Longa Mancini (Rome 1979).

Collateral line of the illustrious and old Mancini family , subline of the Naples line, initiated in the 19th century by the Count Antonio, first lieutenant of the Neapolitan Army. The son Giuseppe (1852–1903), Belle-Epoque dandy, married donna Maria Antonietta Marinelli (1862–1911),daughter of the noble Vittore of the marquesses Marinelli, in 1882; they had seven children along which Carlo Alberto Antonio (1883–1940) who married Maria Concetta Cassone (1886–1965) in 1911. They had Antonio (1915–1990), noncommissioned officer of the Italian Army, he was batman of the Marshal of Italy Rodolfo Graziani in 1938, and during the Second World War fought in the VIII Army Corps on the Greek-Albanian battlefront; in 1943 he was caught by the Germans in Yugoslavia and he was confined at Hohenstein in Saxony, but he escaped; then he got the Military Cross. In 1951 he married noble Giulia De Dominicis (1930–1988), daughter of the noble Michele Alfonso De Dominicis (1907–1960), Commander of the Order of Merit of the Republic. His son Adriano Fulvio Mario (1952)[4] entrepreneur on the advertising area, member of the Società Genealogica Italiana, Commander of the Sovereign Order of Saint John of Jerusalem who married noble Susanna Grazia Elisabetta La Longa (1955) in 1977 has Federico Adriano Mario (1979)[5] member of Accademia Araldica Nobiliare Italiana, who married donna Maria Emanuela Amato Scirè of the dukes of Caccamo (1981) [6] in 2009 whom Eleonora Lucrezia Diana (2011), and Lavinia Susanna Giulia (1987).