The H. J. Heinz Company (NYSE: HNZ), commonly known as Heinz and famous for its "57 Varieties" slogan and its ketchup, is an American food company with world headquarters in Pittsburgh, Pennsylvania.

Perhaps best known for its ketchup, the H.J. Heinz Company manufactures thousands of food products in plants on six continents and markets these products in more than 200 countries and territories. Heinz ranked first in ketchup in the United States with a market share in excess of 50%. Moreover, its Ore-Ida label held more than 50% of the frozen-potato sector. Overall, the company claims to have 150 number one or number two brands worldwide.

Henry John Heinz learned from his parent's ideas, making him a progressive businessman. He believed in fairness in business, saying, "Deal with the seller so justly that he will want to sell to you again".[4]

Heinz products around the world

Heinz manufactures 'Big Red' tomato sauce, and a number of flavored baked bean varieties, as well as canned meals. Not all products are produced in Australia, products such as Heinz ready to eat microwave bowl soups are imported into Australia.[citation needed] Heinz also markets the Wattie's brand of canned foods, which are made in New Zealand.

On May 27, 2011, Heinz announced it would close its factory in Girgarre and downsize its factories in Northgate (Brisbane), and Wagga Wagga, with loss of more than 300 jobs.[7][8] Heinz has other factories in Echuca and Mill Park.[5]

In the Philippines, Heinz was distributed by NutriAsia.[citation needed]

As of March 2006, Heinz and NutriAsia have ended their joint-venture partnership and Heinz products are now distributed by Getz Bros.[citation needed]

The Heinz logo can be seen in McDonald's ketchup sachets.

Heinz was established in Canada in 1909 in a former tobacco factory in Leamington, Ontario (Tomato Capital of Canada). Most products shipped from Leamington have English and French labels for distribution throughout Canada but a substantial amount of product is sent to the United States. Ketchup is the main product produced there but the factory also produces Canada Fancy (Grade A) tomato juice, mustard, vinegar, pickles, baby food, BBQ sauces, canned pastas, beans, pasta sauces, gravies and soups. Heinz Canada is also the major supplier of single serving and flexible packaging condiments for most fast food chains in Canada. Leamington is the largest tomato processing region per acreage in the world. The Leamington plant usually processes more than 250,000 tons of tomatoes per year. With its unique combination of climate and rich soil, Leamington is one of the best areas for growing vegetables in the world[citation needed]. Heinz Canada's head office is in North York, Ontario and it also has operations in St. Marys, Ontario; Calgary, Alberta; and Montreal, Quebec.

Heinz Ketchup is available in glass bottles in India with two varieties, one is the normal Heinz Ketchup, and one is an alternative which does not contain any traces of garlic or onion, two vital ingredients in the original ketchup. This is due to the large number of Indians who refrain from eating garlic and onion for religious and cultural reasons.

Indian taste preferences vary from region to region, making it necessary for Western brands like Heinz to work on Indian interpretations of ketchups for sale in the country.[9]

Heinz sells many products in the Netherlands, the Elst factory is the primary production facility for Heinz sauces for Western Europe. In 2006, production of HP Sauce and Daddies was transferred from Birmingham, UK to Elst as a result of the acquisition of HP Foods and the subsequent closure of the Aston factory.[10] Subsequently, Heinz suffered severe supply issues for the ex-HP Foods brands as the Elst factory struggled to integrate production, resulting in significant negative coverage from UK retailers.[11] Heinz was forced to begin bottling sauce in Spain, having shipped ready-made sauce from Holland to get product back into supply.[12]

Heinz is the leading seller of baked beans in the UK, with its beans product lines referred to as Heinz Baked Beanz.

The UK headquarters is in Hayes, Middlesex. After opening its first overseas office in London in 1896, the company opened its first UK factory in Peckham, south London in 1905. This was followed by a second factory at Harlesden, north-west London in 1919. Production was started at a former munitions factory at Standish near Wigan in 1946 before the new factory at Kitt Green Wigan opened in 1959. Heinz also has an infant food factory in Kendal, Cumbria. The site specializes in baby milks, previously under the brand of Farley's, but now manufactures under the name Heinz Nurture. It currently has around 200 employees.

The 1970s television comedy series The Goodies spoofed the Heinz baked beans adverts. Tim Brooke-Taylor played the star of the advert, but was unable to get the poem used in the advert right.

In 2001, the Food Standards Agency of the Government of the United Kingdom found Heinz canned baked beans products to be contaminated with the hormone disruptor bisphenol.[13]

In June 2009, a company PR stunt announced they had introduced the prototype of the world's smallest, portable microwave, the "Beanzawave". The microwave would be targeted at office workers and students and can be powered by a computer via a USB port. The size of the microwave is good for heating up coffee or tea or small items. It is also good for heating up Heinz's hot snack line, Snap Pots, for which it was created. The prototype was designed by microwave expert, Gordon Andrews and industrial designer, Stephen Frazer.[14] 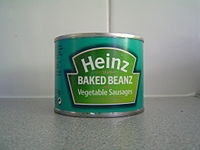 Heinz is headquartered in Pittsburgh, Pennsylvania, where the company has been located since 1890, and the company's "keystone" logo is based on that of Pennsylvania, the "keystone state". However, a majority of its ketchup is produced at a factory in Fremont, Ohio. Heinz Field, home to the Pittsburgh Steelers, was named after the Heinz company in 2001. Heinz opened a pickle factory in Holland, Michigan, in 1897; it is the largest such facility in the world.[citation needed]

Billionaire Nelson Peltz initiated a proxy battle during 2006, culminating in a vote to place Peltz's nominees on the Board, which, depending on how many seats the dissident group received after the final vote tally, would displace some of the current board members. After the final vote, 2 out of the 5 nominees joined the Heinz Board. The new members of the board were Nelson Peltz and Matthew Craig Walsh.

In June 2008, Heinz began an advertising campaign in the United Kingdom for their new New York Deli Mayo product range. The advertisement featured a family with the mother replaced by a stereotypical male New York deli worker. The advert ended with the father and the 'mother' kissing. This drew 200 complaints to the Advertising Standards Authority.[15] On June 24, 2008 Heinz took the decision to withdraw the advertisement, which was initially supposed to run for five weeks. A spokesperson for Heinz stated that the reason for the withdrawal was recognition of the fact that some of its customers had concerns about the advertisement's content.[16]

Withdrawing the advert caused further controversy with Heinz being accused of homophobia.[17] The gay rights group Stonewall has called for a boycott of the company's products. Some have expressed surprise that Heinz has responded to what they view as a small number of complainants, relative to the United Kingdom's 3.6 million gay and lesbian consumers.[18] MP Diane Abbott called the decision to withdraw the advert 'ill-considered' and 'likely to offend the gay community' in an Early Day Motion on June 25.[19]

In the 1959 novel The Manchurian Candidate antagonist Senator Johnny Iselin charges that there are Communists infiltrating the United States Defense Department. He offers different numbers of Communists at different times until he and his wife Eleanor settle on 57 as the number, "not only because Johnny would be able to remember it but because all of the jerks could remember it, too, as it could be linked so easily with the fifty-seven varieties of canned food that had been advertised so well and so steadily for so many years."[20] The 1962 film adaptation retains this plot device, with the number 57 selected upon the on-screen viewing of a Heinz 57 bottle.