Wildwood is a city in Cape May County, New Jersey, United States. It is part of the Ocean City Metropolitan Statistical Area and is a popular summer resort destination. As of the 2010 United States Census, the city's year-round population was 5,325. With visitors, the population can swell to 250,000 during the summer months.[9]

The Wildwoods is used as a collective term for the four communities that have "Wildwood" as part of the municipality name — the Borough of Wildwood Crest, City of Wildwood, Borough of West Wildwood and the City of North Wildwood — together with Diamond Beach, a portion of Lower Township situated on the island.

Wildwood was originally incorporated as a borough by an Act of the New Jersey Legislature on May 1, 1895, from portions of Middle Township, based on the results of a referendum held the previous day. On January 1, 1912, Wildwood was incorporated as a city, replacing both Wildwood borough and Holly Beach City.[10]

The Wildwoods began developing as a resort in the last decade of the 19th century. A building boom began in the 1950s, due partially to the construction and completion of the Garden State Parkway.[11] 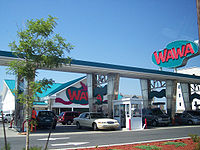 Wildwood is home to over 200 motels, built during the Doo-Wop era of the 1950s and 1960s,[14] in an area recognized by the state of New Jersey, known as the Wildwoods Shore Resort Historic District.[15] The term "doo-wop" was coined by Cape May's Mid-Atlantic Center For The Arts in the early 1990s to describe the unique, space-age architectural style, which is also referred to as the Googie or populuxe style.[16]

The motels are unique in appearance, with Vegas-like neon signs and fantastic architecture.[17] New construction in the area has seen the demolition of several motels to make room for larger condominiums. The Wildwood Doo Wop Preservation League has taken action to help save and restore these historic buildings. The Caribbean Motel in Wildwood Crest, and the Chateau Bleu Motel in North Wildwoods are both listed on the National Register of Historic Places.

A 1950s Doo Wop museum has recently been built which contains property from demolished motels such as neon signs and furniture.[18] Neo-Doo Wop buildings in the area feature a neon lit Wawa and a 1950s styled Acme Supermarket. 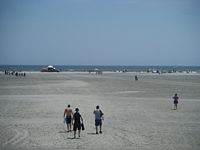 Wildwood is a resort city that is very popular with vacationers and tourists mostly from New Jersey, Pennsylvania, Maryland, New York, Delaware and even nearby parts of Canada during the summer months. Its most notable features are its beach and 1.8 miles (2.9 km) boardwalk, home to the Morey's Piers amusement complex and Raging Waters and Ocean Oasis waterparks owned by Morey's Piers. The boardwalk features a trolley called the "Tramcar", which runs from end to end. In June 2006, its Doo-Wop-style motels were placed on the National Trust for Historic Preservation's annual Eleven Most Endangered List,[19] described as "irreplaceable icons of popular culture."[20][21]

Wildwood was ranked the best beach in New Jersey in the 2008 Top 10 Beaches Contest sponsored by the New Jersey Marine Sciences Consortium.[22]

Wildwood is home to the New Jersey Firefighter's Convention, held annually every September since the 1970s. Known for its parade featuring fire company apparatus from across the state, it moved from Atlantic City due in part to rising crime and the disallowing of the parade on city streets. Wildwood is also home to an annual co-ed beach Ultimate Frisbee tournament drawing teams from all over the country that attracted 430 teams and over 5,000 players to its 19th annual event in 2011.[23]

Portions of Wildwood are part of an Urban Enterprise Zone in The Wildwoods. In addition to other benefits to encourage employment within the Zone, shoppers can take advantage of a reduced 3½% sales tax rate (versus the 7% rate charged statewide).[24] 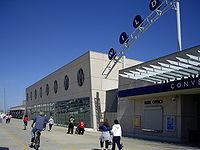 The Wildwood Boardwalk features several amusement parks and shops, most notably three piers collectively known as Morey's Piers. Due to the far distance of the ocean from the boardwalk, the beach is home to many sporting events, concerts, and monster truck rallies in view of the boardwalk. A stage is set off to the side of the boardwalk near Mariner's Landing Pier where several performances are held throughout the summer.

In 2008-09, a section of the boardwalk was rebuilt using ipe tropical hardwood, even though the town pledged to use domestic black locust.[25]

Boardwalk Chapel is a summertime Christian Gospel outreach on the boardwalk, sandwiched between a pizzeria and a gift shop. Its wide entrance offers thousands of board walkers the opportunity to move freely in and out of any one of its 77 consecutive evening services held during June, July and August.[26] 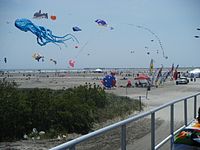 Wildwood is governed by a three-member commission under the Walsh Act Commissioner form of municipal government.[1]

History of recalls in Wildwood

Since the City of Wildwood has been incorporated on January 1, 1912, there have been three recall elections and all were successful. The first was in 1938 when the State's first female Mayor Doris W. Bradway and Commissioner Frederick W. Murray were voted out of office.[32] The second successful recall was in December 1984 when Mayor Earl B. Ostrander was recalled.[33] The third successful recall was in December 2009 when Mayor Ernest Troiano, Jr. and Commissioner William N. Davenport were recalled.[34]

There are also two Catholic schools on the island, Cape Trinity Catholic and Wildwood Catholic High School in North Wildwood, which operate separately but share a common building starting in September 2010.[47] Both schools operate under the auspices of the Roman Catholic Diocese of Camden.[48]

Notable current and former residents of Wildwood include: