The University of Denver Men's Hockey Program has been playing NCAA Division I hockey since 1949. Pioneer Hockey is one of the most successful hockey programs in the history of collegiate hockey. The Pioneers rank (with the University of North Dakota) second in all-time NCAA Men's Ice Hockey Championships with 7. Only the University of Michigan (9) has more Championships. Since the creation of the Western Collegiate Hockey Association in 1959, the Pioneers have won 9 WCHA Regular Season Championships (now the recipients of the MacNaughton Cup) and 14 WCHA Playoff Championships (now the recipients of the Broadmoor Trophy). The Pioneers have placed numerous players into the National Hockey League, including Chicago Black Hawks great Keith Magnuson, NHL journeyman Kevin Dineen, and recent phenoms Matt Carle (2006 Hobey Baker Award winner) of the Philadelphia Flyers and Paul Stastny of the Colorado Avalanche.

Of all the rivals that the Denver Pioneer's hockey program play against the most intense rivalry is that from the neighboring college of the Colorado College Tigers men's ice hockey. Since DU's hockey program started in 1949 the two schools have always met during the hockey season. In the 1993-04 season a gold pan trophy was added as a reward for the winning team thus the rivalry has been dubbed the Battle for the Gold Pan. It is widely considered to be the most heated rivalry in college hockey.

University of Denver Arena was a 5,200-seat multi-purpose arena in Denver, Colorado. It was home to the University of Denver Pioneers ice hockey team. It also hosted several Frozen Fours. It was razed in 1997 to make room for the $75 million Magness Arena, (part of the Ritchie Center for Sports and Wellness) which opened in 1999.

Originally a Naval Drill Hall built during World War II in Farragut, Idaho, the DU arena was donated to the University after the war and reassembled on the Denver campus in 1948-49 to house the University's then-new ice hockey program.

The arena was refurbished in 1972-73 when the roof needed repairs, and 14 seven-ton steel trussess were added to shore up the roof. Additional patchwork renovations were added in the 1990s, prior to razing the building in 1997.

The best known features of the arena were the steep bleacher balcony at the south end, and the 1970s rainbow painted on the north end wall. Famous hockey games held there include the NCAA ice hockey finals in 1961, 1964 and 1976. 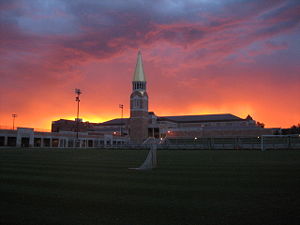 The arena is named after cable television pioneer Bob Magness, who donated $10 million towards construction costs.

Battle for the Gold Pan